Every cosplayer knows the importance of the hair style to complete a cosplay, we will focus on Saber’s braid bun. We’ll teach you step by step of how to style it.  Here we used a long blond wig, if you have such real hair, then use your own and save the money to buy a wig.

Firstly part the hair in 3 portions and use a hair band to get a tail as pictured. 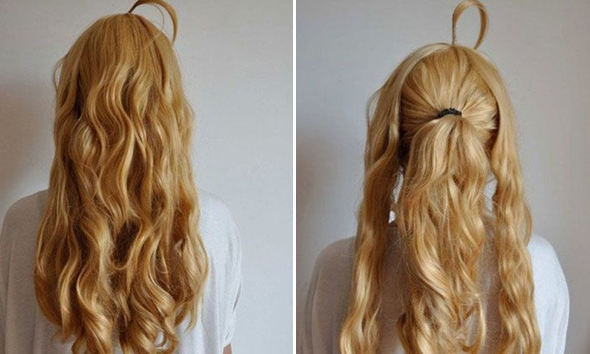 END_OF_DOCUMENT_TOKEN_TO_BE_REPLACED

Cosplay fans, have you already finished the schedule for your 2012 cosplay plans? Believe it or not, you will be lucky since you find us. Here, an experienced group engaged in designing and manufacturing aims to ideally cater to all of your needs. For deluxe yet cheap cosplay costumes, wigs, shoes, Lolita clothes, Halloween costumes etc, don’t be hesitant to pay a visit to Miccostumes.com now :P.

This is the Fate Stay Night Blue Saber cosplay costume, sold on $79.83. Shop here, you will receive a costume that makes you look the same with Saber in a short time. Fast shipping is promised anytime. So is our customer service. This Saber costume includes a jacket, dress and pants. Since the manga style got a careful analysis before the cloth is cut off, the real cosplay costume is ensured to feature wonderful accuracy on each small detail. High-quality cotton was adopted to make the costume, making you look and also feel great on the coming show!

Since taking what you consider into our account, we aim to make costumes for everybody. So, except regular size S, M, L and XL, we also offer custom-made service. Fill in the form while placing your order, we will make the costume to perfectly fit your body shape. We ship the costume worldwide. To realize your cosplay dream, without spending a small fortune, visit our cosplay store now.

Except Fate/Stay Night Saber cosplay found by us days ago, Maridah also shows us many other breathtaking cosplay pictures in her gallery. This American girl is absolutely a cosplay talent, having a more than 10 years’ background in the performing art field. She is a fan for anime & Star Wars, who loves to collect figures and dollfies. We are lucky to invite Maridah to join in our cosplayer interview. Now, let’s take a look at what she shares with us below.

Hello! I’m Maridah. I’m a cosplayer living in California, USA and I’ve be cosplaying for a little over 10 years now.

Cosplay is one of my favorite hobbies. I’m a long time anime fan, so it’s a sort of expression of fandom for me as well as an outlet that lets me be creative and have fun making and wearing costumes.

My first cosplay was Relena from Gundam Wing back in 2001.

I’ve had too many good moments to count. I think the one that stands out to me most is the first time I wore my Saber armor to Anime Expo in 2009. I’ve never had such a mass of people around me before, taking pictures and talking with me about my costume. I was standing still for ages posing and there was a mass of people. It was pretty amazing to have that many people want to photograph my cosplay. The pride and enjoyment of that day sticks with me as a high point and encouragement for me on future projects. I want to get people as excited with my projects as I am about them, so it was a great moment. Cosplay is a great way to show you love something, so sharing it with others is the epitome of the craft to me.

My favorite shoot would probably be one I did with friends in September of 2010 in a Japanese traditional room for Fate/Stay Night costumes. We spent a lot of time cracking up and goofing around so it was a lot of fun. The photos are also some of my favorites.

6. What’s your favorite anime/manga/game character to cosplay as?

Saber from Fate/Stay Night or Lina Inverse from Slayers. Both are so much fun to wear and people really react well to both. It’s fun to see other fans of the characters like the costumes and want to take photos with me.

Quite a few! I’m always working on several costumes at a time. Right now I have 5-6 things in the works. I like to keep myself busy on multiple projects at a time so I don’t get bored or frustrated with just one of them. Sometime soon I’ll be debuting another Saber costume and some stuff from Vocaloid.

I make all my costumes, props, and style my own wigs with the exception of my Mugi Summer School Uniform (K-On) which is modified from ‘found’ items. I love to sew and I have a background in theater so cosplay allows me to continue that craft in a small way.

Of course! Quite a few, and probably too many to list. Vampy, Cosplay Kitten, Yuki le Fay, Pink Bunnie… if I start this list it might go on for a while…

Not really. I don’t adopt character personas like some cosplayers choose to do, but it certainly does give me a great adrenaline rush to be out in costume. I try to convey something of the character when I pose, though, even though I don’t act out a part. It’s just a fun experience and a way to be different from my normal self on the weekends.

Cosplay what you love and do it with friends. Sharing the experience with people you enjoy being around makes it much better. Pick your favorite character and go out and enjoy the event. It’s impossible not to have fun if you just let yourself go and be silly for a while in costume.

I swear this is the best Fate/Stay Night Saber Cosplay I have ever seen till now. It’s done by Maridah – a really pretty Cosplay talent. Yes, this is another stunning cosplay we can’t help but wanting to share with you. And it does seem cosplays done by her often express irresistible femininity, elegance and appeal. The Saber costume makes her seem so cool. The fighting picture looks great, right? But the most alluring element on her appearance, in my opinion, is her blond hair. It makes her white skin tone seem even better. Also, her eyes are so beautiful:P. I can’t find any defect on her performance. Any more cosplay works from her, we will continue to share you here. Let’s expect.