So we list the following Ninja weapons and tools for you to learn and as references.

Naruto devotees may have already noticed various ninja weapons and tools appeared in anime & managa, such as kunai, katana, shuriken, kusarigama, etc. The story in Naruto is fictional,but those weapons are absolutely true. Ninja culture has a long history in Japan, in which ninja tools take a rather important part. Now, let’s talk about the history of ninja tools in this article.

Materials used to make ninja weapons and tools are not luxurious, yet rather practical. As ninjas can not draw any attention, tools for them are also rather convenient and easy to be carried, which won’t make a sound while being used. 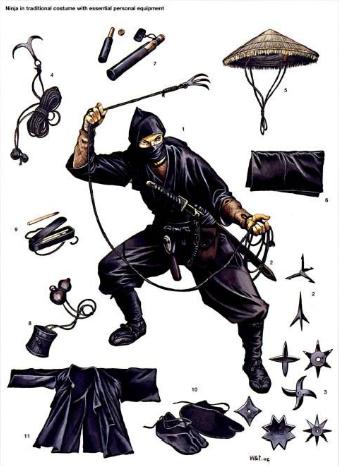 First, focus on climbing equipments. As the name implies, climbing equipments are used while scrambling. Below picture shows us the record about ladder in Bansenshukai. Five different ladders are shown there. But categories on ladders in Bansenshukai are much more than these. Take the far left one as an example here. It’s made of two bamboos. To avoid making a sound while climbing, both ends of the ladder are covered by supple items. Clue ropes, which are said to be strings stuck among toes on Japanese getas, are used to bind the whiffletrees. But methods on how to bind those ropes are passed on by word of mouth. Thus, it’s difficult to know. 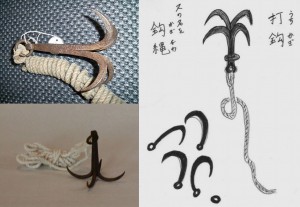 It’s composed of four ferric hooks that are fixed together by a ferric circle. In most cases, the string is about 4.5 meters long. But the accurate length should be decided according to the place where it will be used. Kaginawa is definitely one of the must-have implements ninjas will carry. 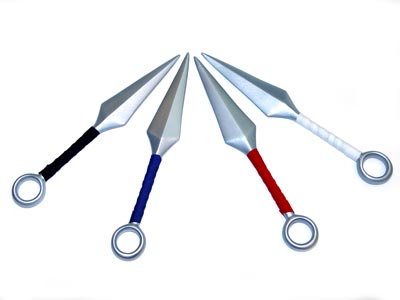 Kunai belongs to the climbing equipment collection. It’s rather thin and can be inserted into narrow crevices. Being used as a small trowel at ordinary times, it can fend against the rival’s sword or Shuriken (or it can be directly used as a Shuriken). Various shapes are available. 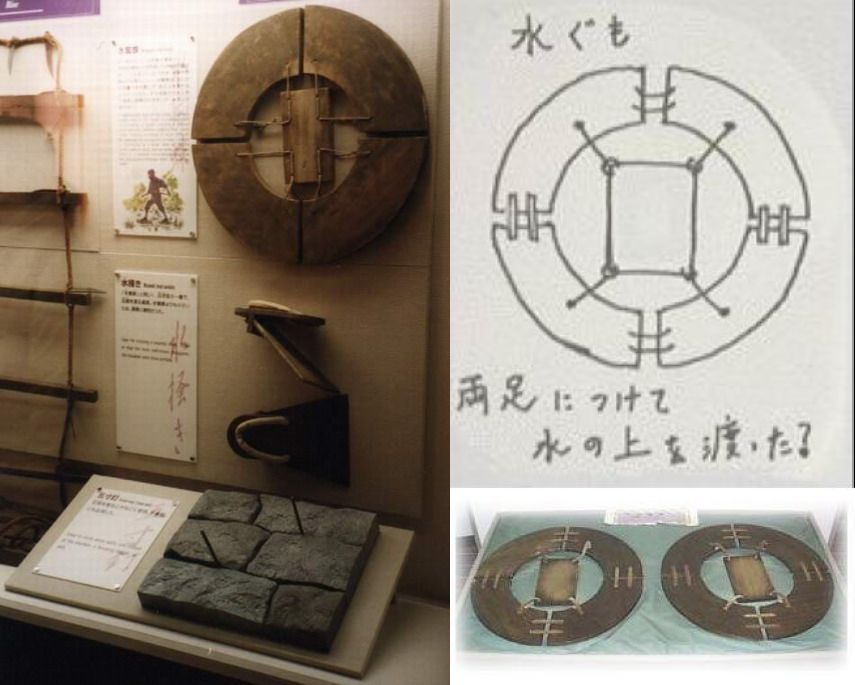 Below is the structure chart for Mizugumo, which imitates water spider’s construction and gets the name from this insect. Ninjas walk on water by it. Ninjutsu pays close importance to secret. The action will be affected if ninjas make their bodies wet. And water drops will also expose their whereabouts. If touching water, fire equipments will cease to be effective. Thus, even though Mizugumo is difficult to be used, it’s still a crucial ninja tool. (Actually, it will be impossible to walk on water with it.)

For ninjas, it’s of great importance to use gunpowder, which is not only a devastating weapon, but also can be used to deliver information. Methods to make these fire equipments are rather secret. Below picture is firework – a kind of fire equipment, which looks so similar with usual fireworks. It can draw away enemies’ attention in an emergency and can be used as a weapon.

Katana is usually around 60 CM long. The blade is wide and heavy. With straight blade, square tan and a long sageo, katana can be used as climbing equipment while executing a task. Besides, the scabbard can help you breathe and eavesdrop in water.

This weapon consists of a weighty chain on one end and a sickle on the other.

Being thrown on the back to prevent enemies’ chasing, Makibishi is rhombic. While going into ancient Japanese buildings that are built by boards and tatami, people will need to take off their shoes. It will be so painful if stepping on a Makibishi. Thus, it’s an excellent ninja tool.

Needlelike flying spur is much more difficult to be used than Shuriken. It’s a concealed weapon that is used in close combats. Hidden in hand guard usually, it also strengthens the protectiveness of the hand guard to withstand the rivals’ chop. 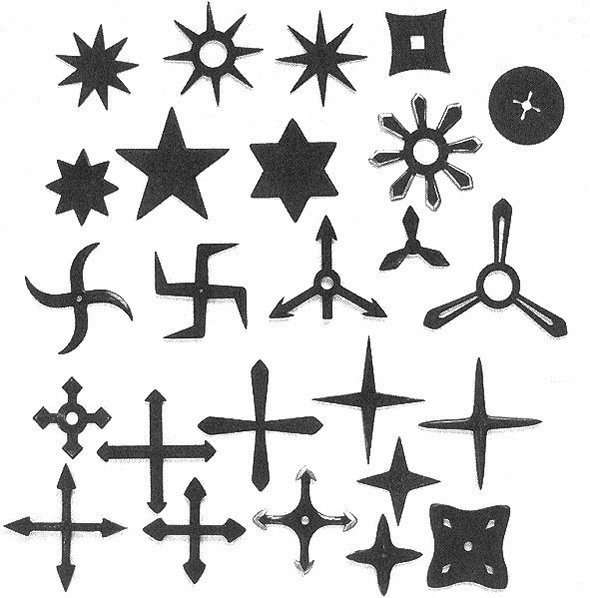 Shuriken is the most typical concealed weapon in ancient times. Ninjas use shuriken in order to suppress enemies’ attack, instead of killing foes in many cases. Although there is no record about it in Bansenshukai, it’s absolutely a useful weapon. Shuriken is made to be various categories, such as triangular shuriken, cross-shaped shuriken, 卍-shaped shuriken, hexagonal shuriken, eight-corner shuriken, etc. Twenty-five patterns are shown in above.

Tekkoukagis are available in kinds of styles. Some of them are carried on fingernails. But some of them are fixed on the back of the hand. It depends on which skill the cosplayer is good at. 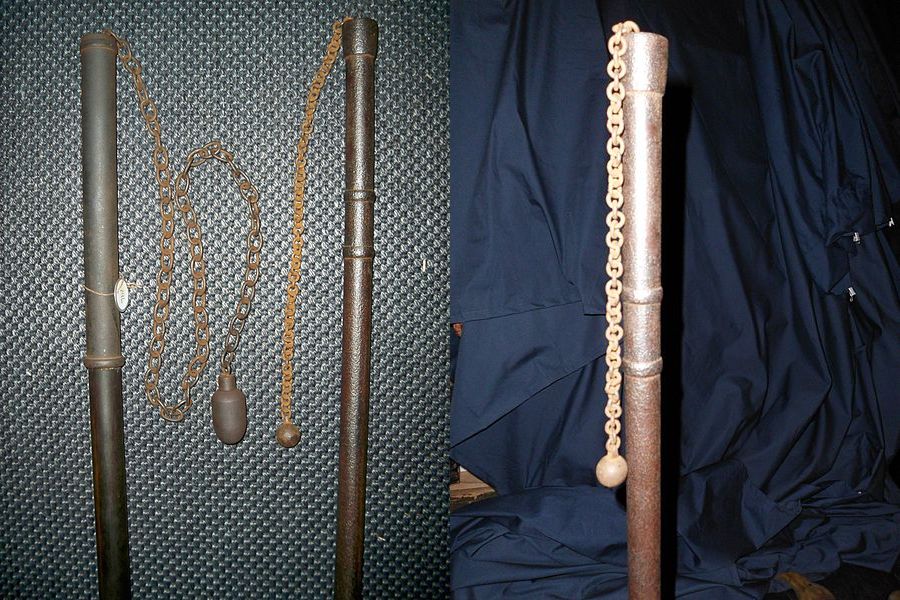 Composed by a solid & hollow wood and a chain on the end, chigiriki is a mace-like weapon. The stick can be as long as the ninja’s forearm or a little longer. Then the chain can be made to be different lengths. In spite of the simple style, a chigiriki is rather aggressive. It can strike or entangle the rivals. Parrying blows from enemies easily and capturing or incapacitating another weapon, it’s one of the favorite weapons for ninjas.

According to the posts from leafninja and shadowclone , we all know the ninja weapons and tools used in Naruto in details :

So if you are a big fan of naruto or who wanna do best of naruto cosplay, know the ninja and ninja weapon/tools history will get much advantages.