Miccostumes.com operates a costume factory so that we can offer you the hottest costumes on the most reasonable prices. To save more while shopping here, you can order now. 15% off is promised on many costumes during the weekend. Plus another 5% refund and 10% discount on your next order if you send us a review, picture or video with the product you buy, you can take action now :D.

Today, Hetalia Axis Powers cosplay is the theme. It leads a hot trend all the time. Here is the Germany costume, made from luxurious cotton. It can be washed directly and then lined dry. A smooth look will be kept easily. Also due to the classy cloth, refined handwork accents the smooth texture on it. This Germany cosplay costume is strictly made according to the anime, including a jacket, trousers, belt and gloves. They do look and feel great!

Hetalia Axis Powers costumes shown here are high-end replicas, which will realize your cosplay dreams easily. Order now, you can choose from size S, M, L, XL and also Custom-Made. The costume can be shipped out in 48hrs and returned for a refund in 3 days if any dissatisfaction. Fast customer service replies to any of your questions. So, since all of your worries have been considered, check this Germany costume out on $65.32 (the original price is $76.85) now? 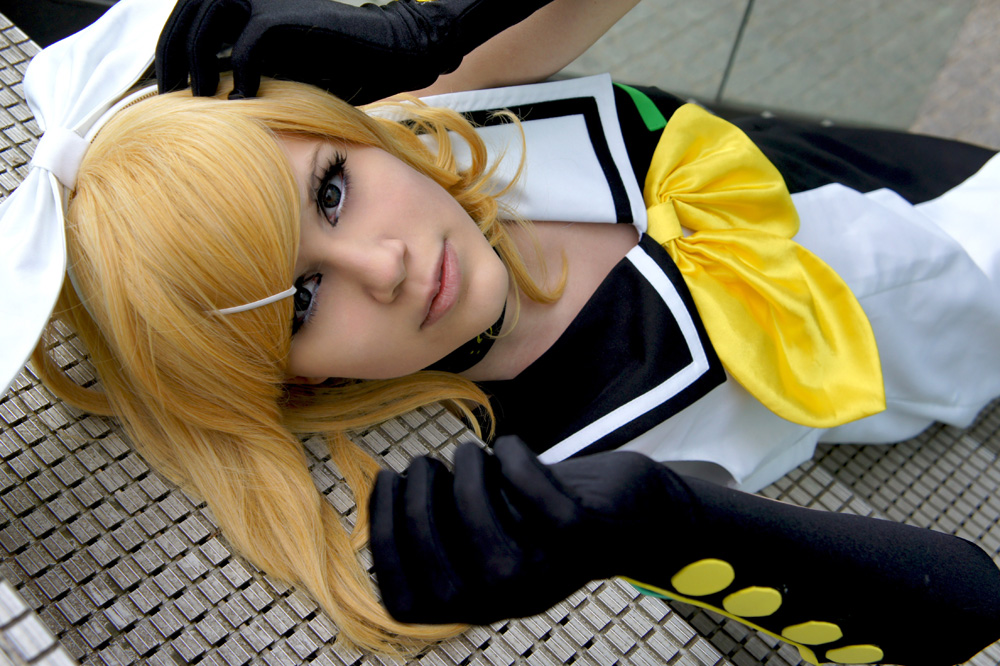 In Germany, the number of cosplayers has increased in the last years.
There are many conventions and fan made events in all parts of the country!
For Germany is, compared to other countries, rather “small”, you can visit nearly every convention if you have enough money.
The biggest conventions are placed in Kassel (Connichi) and Bonn (Animagic).

I am yearly visiting the Connichi, for it is not too far away from my home town. This year, in September, it’s my 3rd time going to this convention!
Also, one of my other regular visited conventions is the Frankfurt book fair, which is not only an anime-related convention but also an ordinary book fair. Nevertheless, the number of cosplayers also has increased on this convention!

You can say that every weekend there are lots of fan made events, so you’ll never get bored here!
Naturally, I am not visiting one of those every weekend for I need time studying for school and sewing my cosplays!

I am also member of a showgroup which is planning to film Vocaloid PV’s. This group is rather new, but we have some ongoing projects like Len Kagamine’s “Spice!”.

My experiences with Cosplay are precious memories I never want to forget about!
Being a cosplayer, I belong to a huge community where I’ve made a lot of friends who I also meet in my free-time to do shootings or just hang out with!
I started to cosplay 3 years ago and it was rather per accident then consciously. In eBay, I was searching for Final Fantasy fan articles and found costumes of Yuna.
I got addicted by them and asked my parents to buy me one as my birthday present!
At this time, I didn’t knew much about wigs and stuff, but I still had lots of fun cosplaying as Lenne on my first convention!

Then, when Final Fantasy XIII was announced, I saw Oerba Dia Vanille and fell in love with this character!
I told myself I needed to cosplay her and begun to make the costume by myself! Because I had no experience in sewing, I bought a skirt and dyed it orange! Haha, the only things that I really made by myself were the bead chains, which was enough work for me already! 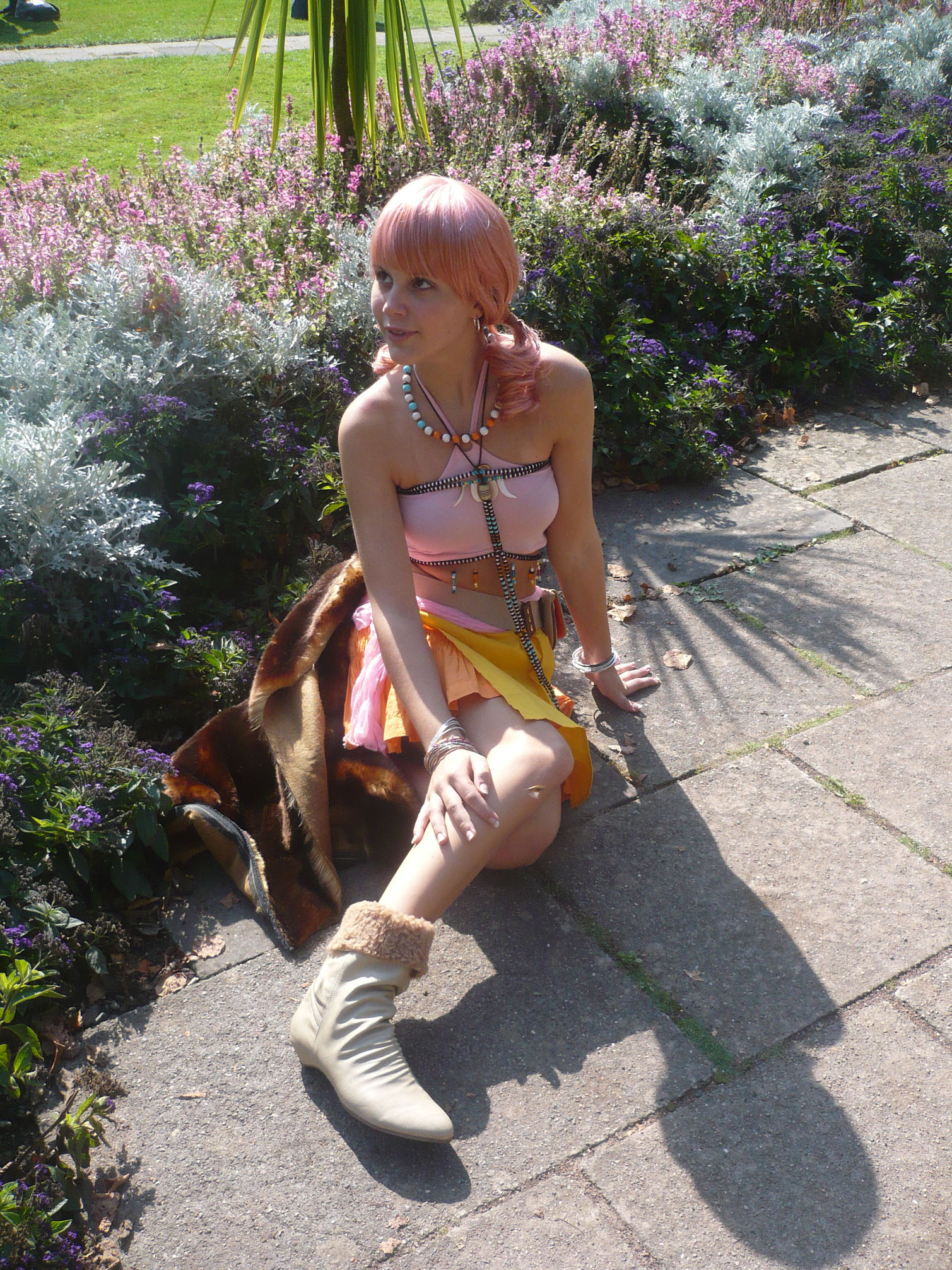 At the beginning , I was very shy and didn’t really know how to talk to people, but with the time I got more confident and had much more fun then I already had before!

I began to sew cosplays by myself and had my ups and downs with it!
The first cosplay I sewed all by myself was Rin Kagamine’s basic outfit! Through a Greek friend of mine, I got to know Vocaloid and couldn’t stop listening to the Kagamine twin’s music!
I was very proud when I finally finished this cosplay! 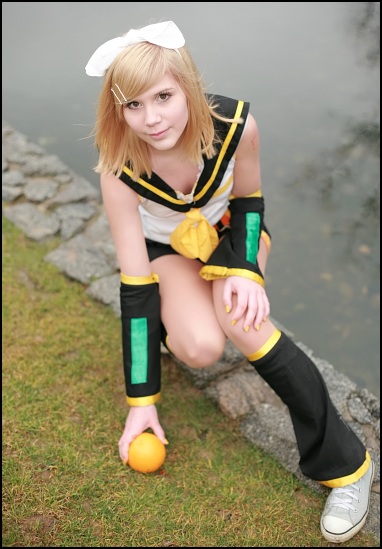 Rin Kagamine became a very important character to me and she is now the one that I mainly cosplay! I have to admit that because of her I dyed my hair blonde and cut it short.. Oh but now I’ve started to let my hair get long again. 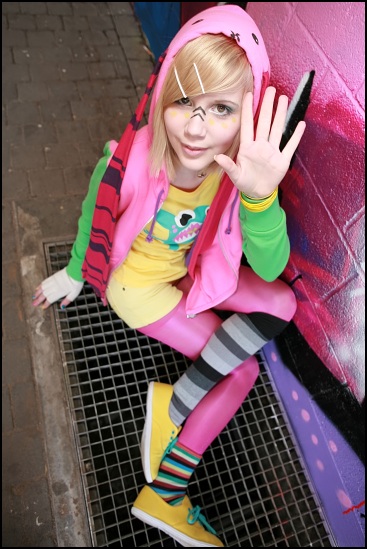 My absolute dream cosplay… I don’t have a special one but I’d really love to do something elaborate! I’d love to work at a ball gown someday!

I’m really looking forward to my future cosplays and the time I will spend being with my friends talking about our beloved hobby! And remember! Cosplay is not a competition! It’s about having fun being someone else (:

Author Bio: MikuMikuLeek is a 17-year-old girl from Germany. She’s obsessed with Vocaloid and Cosplay. You can check her amazing cosplay works at her Deviantart account.