We have talked about profiles of captains & lieutenants in Gotei 13 last time. Here, profiles on insignias in the Gotei 13 are discussed.

As the primary military branch of Soul Society and the main military organization most Shinigami join after graduating from the academy, Gotei 13 in Bleach leaves a deep impression for lots of people. Below are detailed introductions on captains & lieutenants in Gotei 13. Now, let’s take a look.

As the founder of the Bleach Educational Institution – Shinigami Academy, he is also the captain of the 1st Division and the captain-commander of the whole Gotei 13. He embraces sheer constancy and justice. In spite of the old age, his Shunpo and Zanpakutou still often make people tremble with fear by incomparable awfulness.

Being a little introverted, he always stands beside captain-commander Yamamoto.

She is the captain of the 2nd Division, the commander-in-chief of the Onmitsukidō and the corp commander of the Executive Militia. Born in lower noble houses – Fon house, where people make a living by penalization and assassination for generations, her primitive name is Shaolin Fon. After joining in Executive Militia, she inherited his grandmother’s name of Suì-Fēng. Having even been a subordinate for Yoruichi, she rather worshiped Yoruichi and felt very unforgiving about Yoruichi’s leaving without telling her. Suì-Fēng takes her mission strictly and does not forgive any enemy.

As several short scenes imply, he is rather fond of eating snacks and picking his nose. 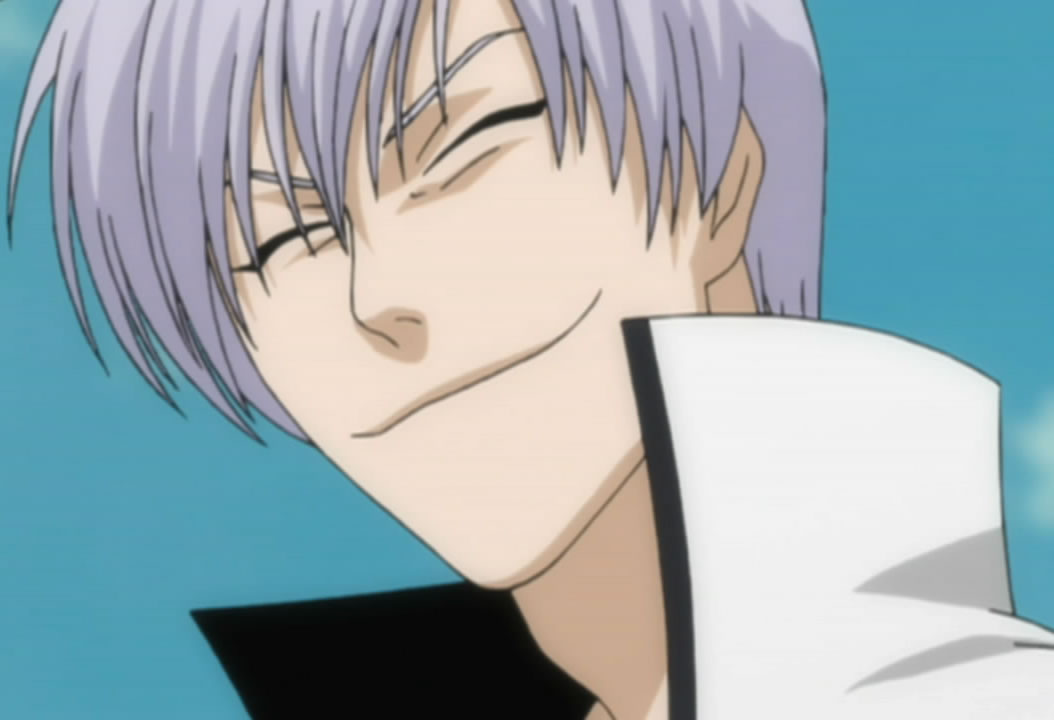 Gin Ichimaru was the captain of the 3rd Division at the start of the series. After betraying Soul Society, his lieutenant Izuru Kira took charge of 3rd Division. He was ever a subordinate of Aizen and an old friend for Rangiku. Always squinting and smiling, it’s hard to understand his thought. The past of this mysterious role was also a secret. Well treating Rangiku, he should think highly of Rangiku. 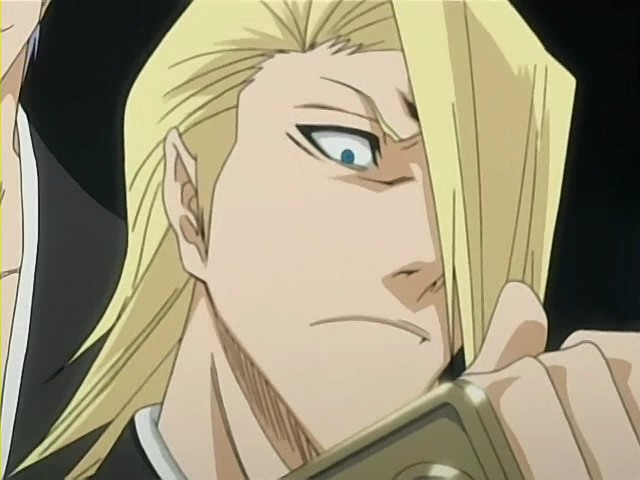 While studying at Shinigami Academy, he met Renji, Hinamori and seemed like develop an unrequited love for Hinamori. He is gentle and cautious. But while staying with Gin, he is often different and feels a little nervous. 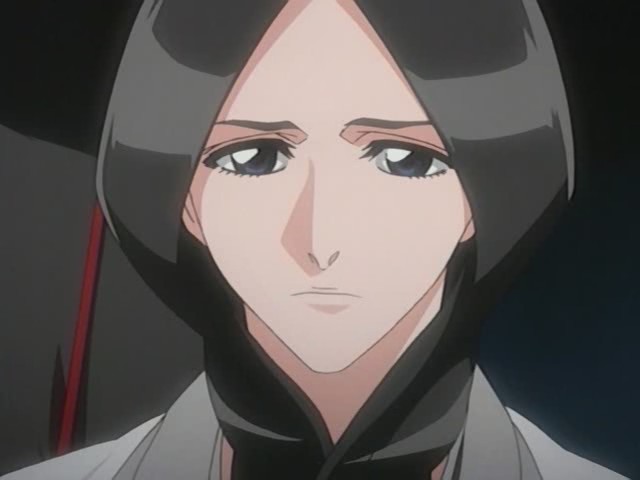 Having especially long braid, she is tender and merciful, being good at medical cure. 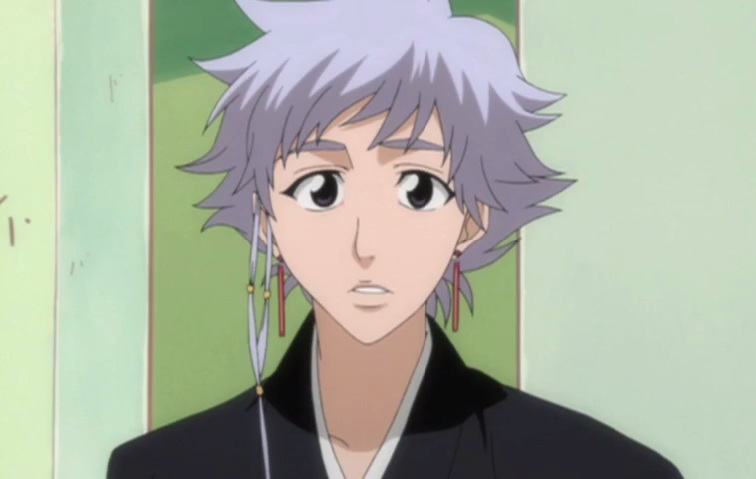 In spite of seeming like a boy, we can discover she is a gilr by the chignon on her head and her sound.

Seeming gentle, prudent and cordial, his being assassination is filled with mystery. Actually, it’s planned and acted by himself. All he did just aimed to capture the Hougyoku in Rukia’s body. It seems like he is afraid of nothing and feels confident with anything. The sense of a devil makes people tremble with fear. 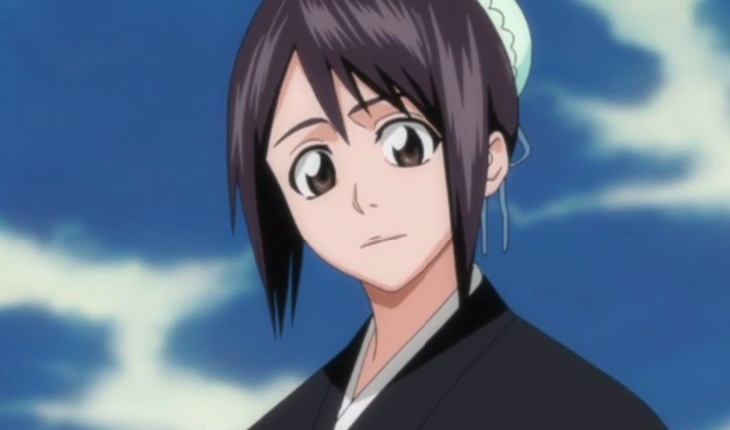 Being sweetheart with Tōshirō since childhood, she met Renji and Izuru while studying at Shinigami Academy. Rather respecting captain of Aizen, she spared no efforts to help Aizen. Innocent, kind-hearted, yet a little dull, she was nearly killed by Aizen. Momo Hinamori is good at Kidou. 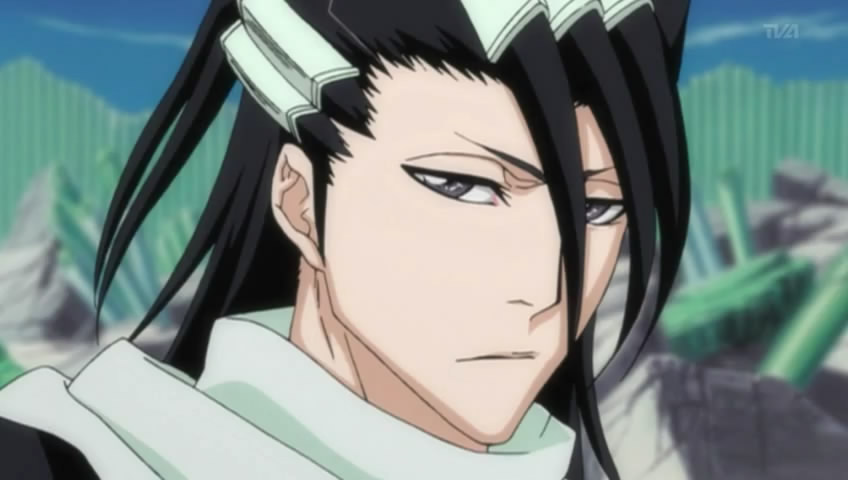 Being Rukia’s brother, Byakuya Kuchiki is the 28th inheritor of blue-blooded Kuchiki family. Kenseikan on his head is a hair accessory that can be worn only by aristocrats. His scarf ginpaku kazahana no uzuginu is only worn by inheritors in the Kuchiki family. He loves platycodon grandiflorum, strolling on the night and peppery items. Strictly abiding by etiquettes and creeds, he seems rather cool but shows hard-won gentleness while seeing the mysterious girl Hisana’s photo. 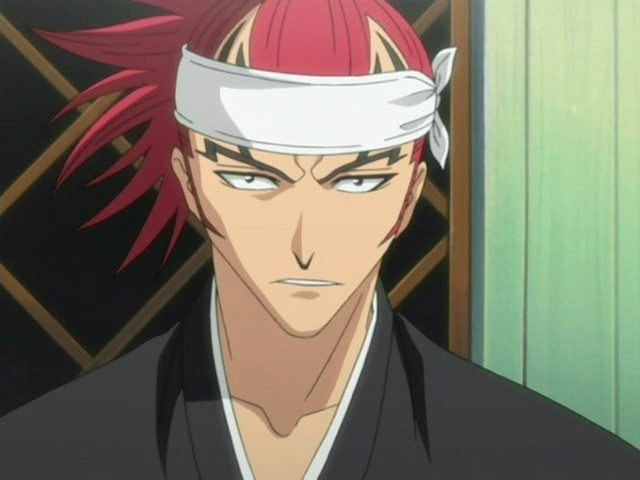 Born in the 78th district of South Rukongai street, he is Rukia’s childhood friend. Graduating from Shinigami Academy in 2066, he is also a classmate for Hinamori and Izuru. Being assigned to the 5th Division while graduating and distributed to the 11th Division because of a strong fighting capability, he was promoted to be vice-captain of the 6th Division. He likes Takoyaki yet dislikes peppery items. Red hair and eyebrow tattooing make him seem rather fashionable. Also, his personality is rather passionate. In spite of being not frank enough while facing Rukia, he still spared no efforts to fight for her. 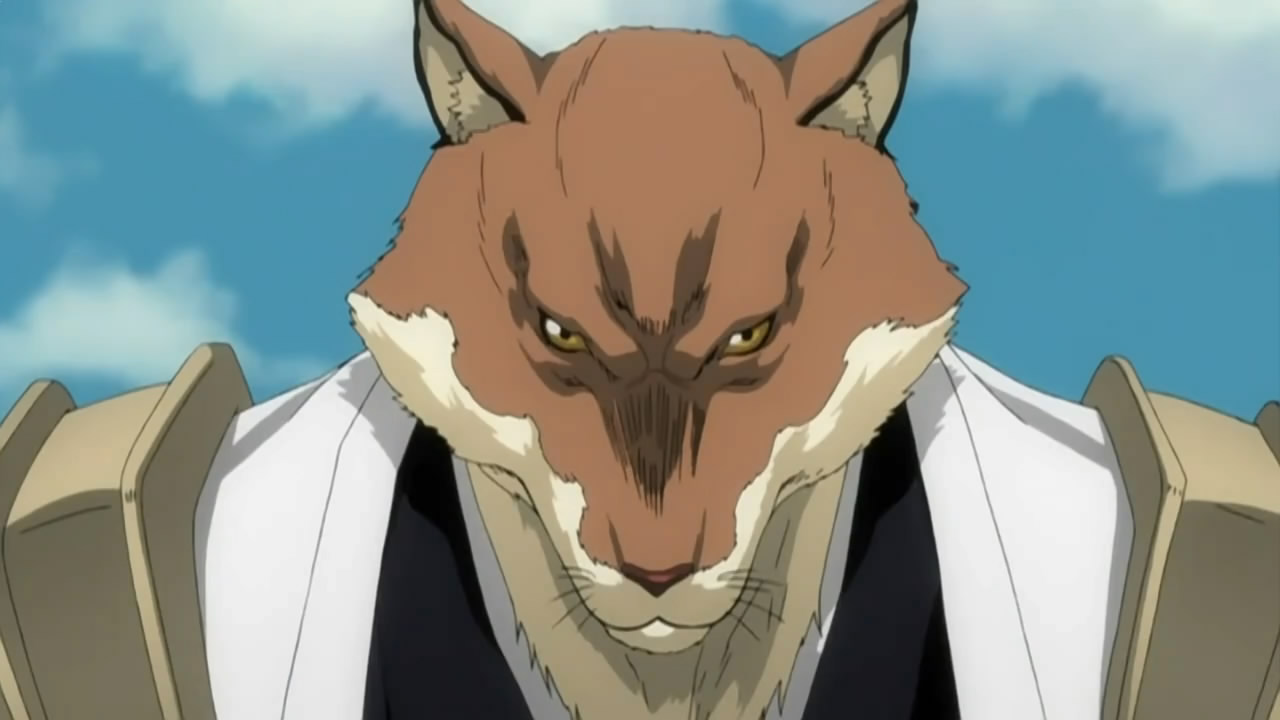 With a tall figure, he always wears a helm (or it may be a mask). But actually, he looks like a wolf. Being rather prudent, he is loyal to his benefactor – captain-commander Yamamoto. 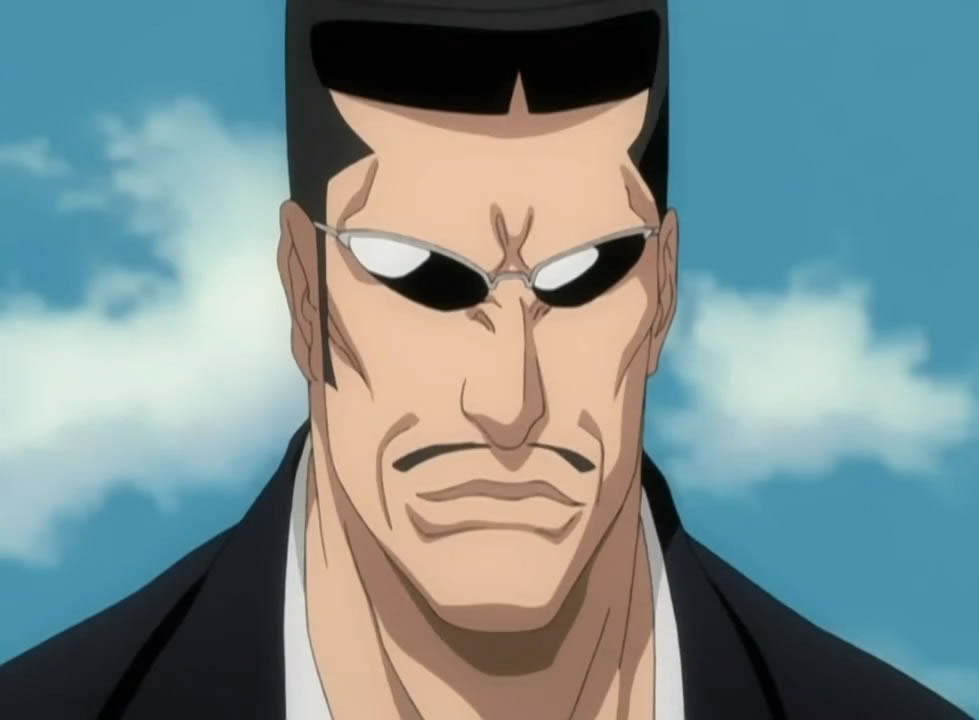 The robust figure and sunglasses make him seem rather cool. Having ever stayed in 11th Division, he is absolutely rather warm-blooded.

As the first captain since Shinigami Academy was founded, Shunsui Kyōraku is a schoolmate and also friend for Ukitake. Both of them are apprentices for captain-commander Yamamoto. According to description from Yamamoto, Shunsui Kyōraku can not withstand females and always acts flightily. But he is also meticulous and more sophisticated than anybody. Once fighting, he will show incomparable power. Relaxed, easy-going and fond of wine-tasting, he has unique life style. Besides, he is rather thoughtful for Nanao. 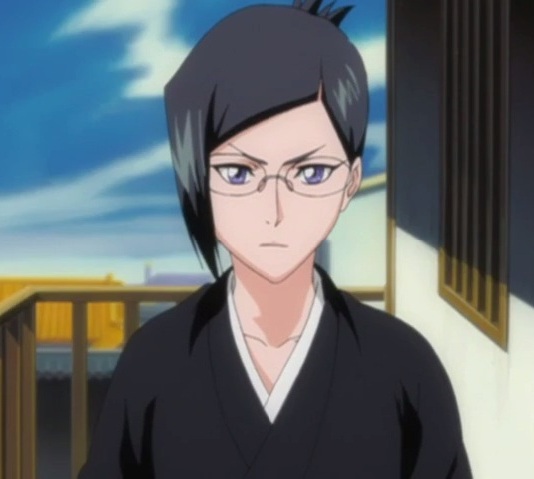 Rather serious-minded and decent, she looks like a strict secretary. But also, she looks funny sometimes. Nanao always follows Kyōraku and takes good care of Kyōraku.

Kaname Tōsen has swarthy complexion and is totally blind. Falling in love with a girl who was killed by her husband, he decided to acquire power of justice and peace then. Following Aizen, he is rather insistent and unswerving.

Shūhei Hisagi is the first student who was assigned to the Gotei 13 before graduation in recent years. He has a signet of 69 (or a tattoo) on the face. And bruises on the right cheek should be scratched by Hollow.

He is a gifted child and sweetheart with Hinamori since childhood. Tōshirō Hitsugaya is the youngest one among those 13 captains. Probably, he also has the poorest qualification. In spite of seeming childish and always frowning, he well treats Rangiku and Hinamori. He is wholehearted in protecting Hinamori. 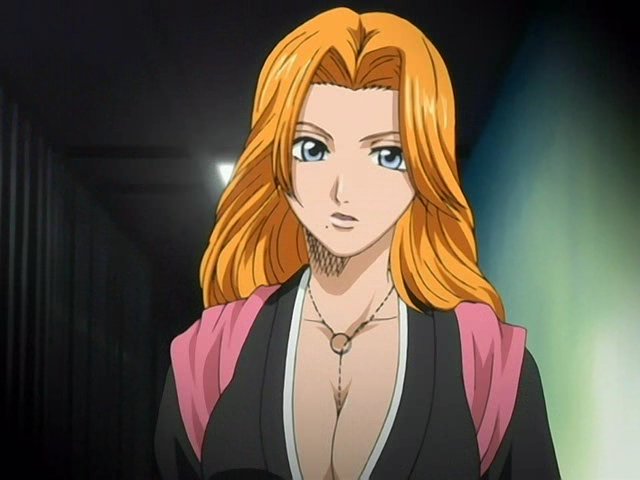 Canty and generous, Rangiku Matsumoto is a pretty girl with brown hair. Besides hot figure, she is conscientious and prudent. Seeming cute as a little girl occasionally, she is reliable actually and rather powerful while meeting enemies. Her past is a riddle. But she is an old friend of Gin. 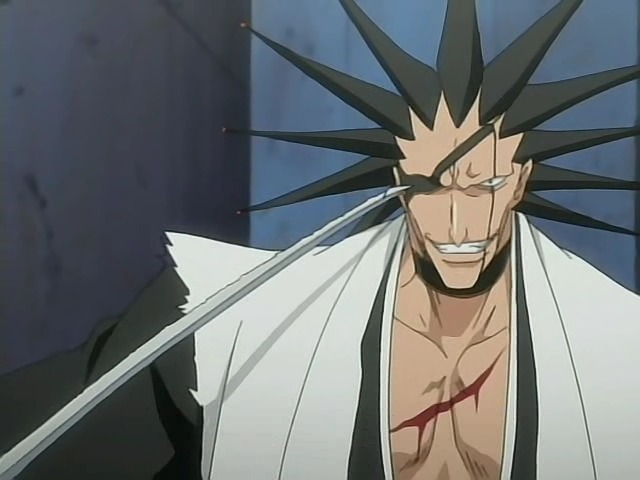 Kenpachi Zaraki has a tall figure, weird hairstyle, under-eye bags reaching to the neck and a rather august face. Born in the 80th district of the North Rukongai, he is the only person who joined in the Gotei Juusantai without entry test and became the captain instantly. He deals with his hairstyle personally every morning. As Kenpachi Zaraki feels nauseated, he has never allowed Yumichika to touch his hair even though Yumichika wants to do this sometimes. Bell has been braided into the hair. Thus, it can not be taken down. There isn’t any food Kenpachi Zaraki specially loves. But he most dislikes eating nattō, which is extremely ropy and difficult to be swallowed. Kenpachi Zaraki is innocent, warm-hearted and bellicose. 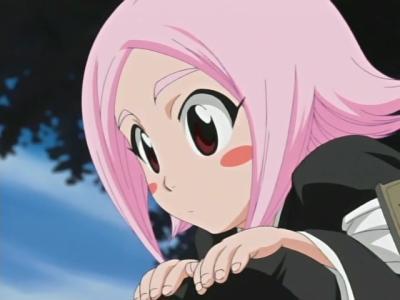 As lieutenant of the 11th Division, Yachiru Kusajishi owns the smallest and lightest figure. Born in the 79th district of north Rukongai street and like Kenpachi, she entered the 11th Division without any test and became the lieutenant instantly. Even though her sword is not rather long, she does not tie it on her waist but carries it by a string. Thus, she installs auxiliary wheels in the front of the scabbard, which is persuaded by ingenious Ikkaku. Yachiru rather loves eating sweets. She will eat up however many she gets. 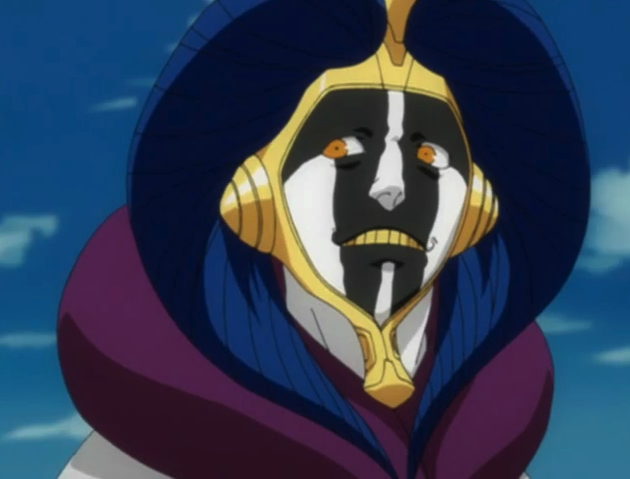 Mayuri Kurotsuchi is the captain of the 12th Division and also the president of the Shinigami Research Institute. He has a crazily enthusiastic yet merciless hobby for research. Killing Uryū’s grandfather and relentlessly attacking Nemu for fighting, he exactly changes a lot after the mask was taken off. 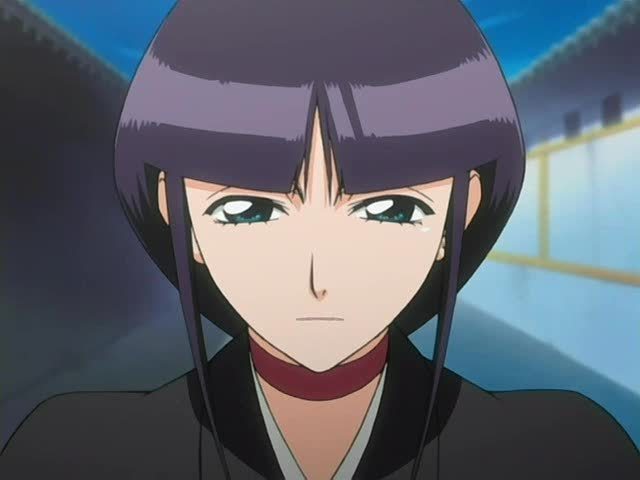 Nemu Kurotsuchi is the daughter of Mayuri, who created her by combining essences on Gigai technology and gikon technology. She could only maintain her body functions by drugs. Calm, dolce yet helpless, she obeyed orders from Mayuri anytime and had never hated him in spite of being attacked by Mayuri.

As the schoolmate and friend for Shunsui, both of them are Yamamoto’s apprentices. Jūshirō Ukitake is also the first captain of Shinigami Academy. Yamamoto said like this: Jūshirō Ukitake has an infirm body. But he is honest, gaining respect from the multitude and often becoming the center in the crowd. Incomparable power is shown once fighting. Ukitake is the commanding officer for Rukia. Fair-minded and cordial, he is esteemed by his subordinates. 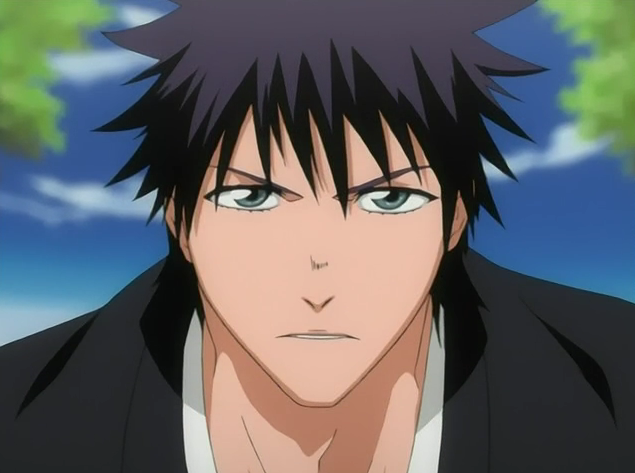 Kaien Shiba is admired by all people in the Gotei 13 by a modest personality.

Later, there will be Part II(about Gotei 13 insignias and flowers) to come.