Hi! My name is Mariel. I am a blogger and a cosplayer. Before, I used to go to anime conventions, take photos of the cosplayers, and post it on my blog. I thought it would remain that way. However, the passionate spirit of cosplay influenced me and now, I cosplay as well. My debut was last November 27, 2011.

Comment: I cosplayed Sakura Haruno of Naruto Shippuden. I wanted to portray her for my cosplay debut. Her costume is simple and she has a cute personality. Furthermore, almost everybody is familiar with her. Plus, Naruto is one of my favorite anime, too. 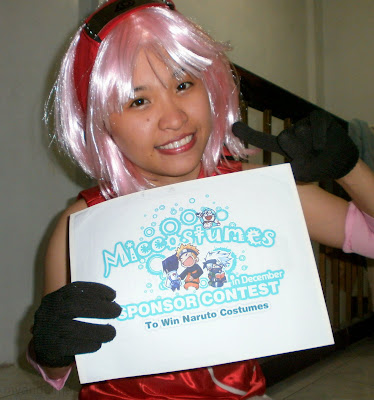 Q: Which costume displayed there as prizes do you most want to get?

A: Among the choices, the Tsunade costume is what I like most. Her character is one of the strongest in the Naruto series. She is a powerful woman, having been appointed as Hokage. I would like to have more cosplay experiences and portraying Tsunade would be a challenge for me.

Q: Are you often photographed? Since many cosplayer (especially beginners) feel nervous or unnatural while facing the lens, would you like to sharing us some experience or skills here?

A: I got lots of requests when I cosplayed Sakura Haruno. I never got nervous because I recalled that I was one of the photographers before I got into cosplay. The most important part is to be confident. The costume can only remain as such, but it is the person who could bring it to the next level. There is no such thing as a poorly made costume. Always remember that the first aspect of a photo that people see is the cosplayer.

Q: Is there any cosplay plan you are rather interested in yet not able to do it due to some reasons? And what is your next plan?

A: My next plan would be to have a formal photoshoot and submit entries to cosplay magazines. But of course, before doing so, I still need to gain experience.

Copy the code below to inbed this “Vote for Me” icon on you site, help Angel Mariel win this contest!

See the Prizes. Naruto cosplay is the theme for sponsor contest in December. So, ten Naruto costumes are picked out as prizes for winners. Click each of them to go to the product page, where detailed information about the costume can be seen. Each winner can choose any ONE from these costumes.

See All Participants in this Contest Here!