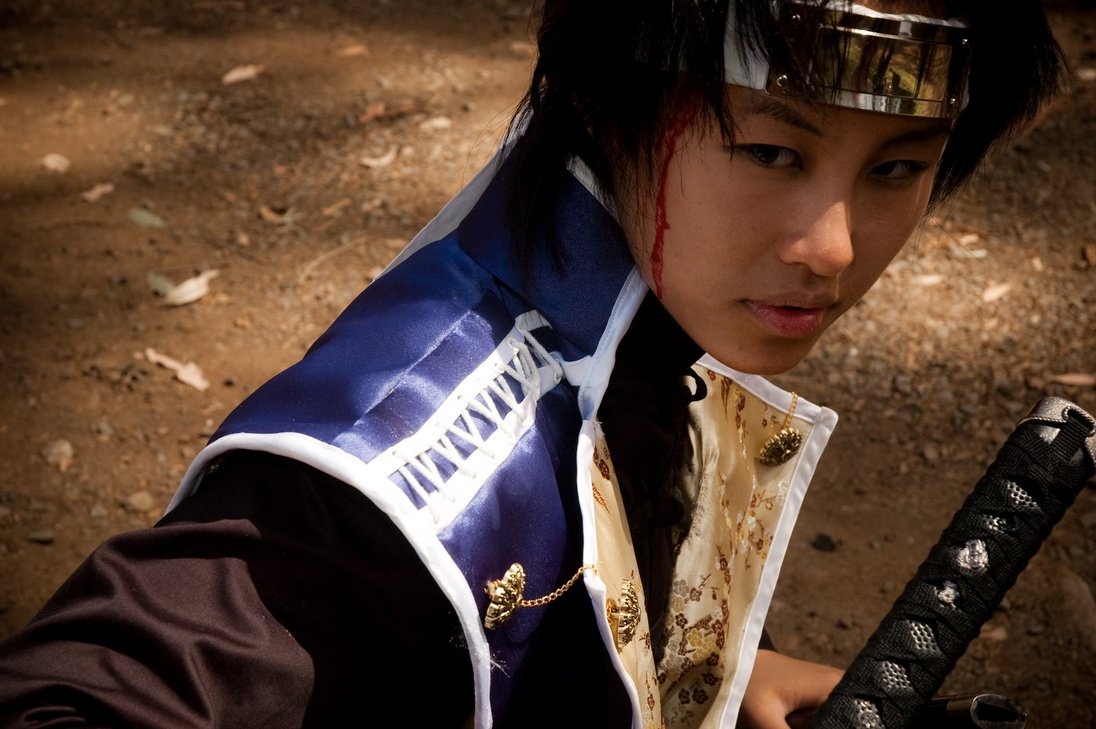 Today, we are honored to have Alita attend Cosplayer interviews program. In 2003, Alita cosplayed Son Pan from Dragonball GT and begun her cosplay life. For her, cosplay does not just mean a fantastic costume. An awesome skit is required. Ok, let’s welcome Alita and start our interview.

1.Please Introduce yourself first?
Hi! My name is Alita and I’m an cosplayer based in Sydney, Australia who’s been creating costumes for around 8 years now. I strive to make bigger and better costumes each year, usually with the help of my cosplay partner Ailee. I love to test the boundaries of costume making, by always wanting to present something that few people, or no one at all, has been able to achieve whether it’s the technical aspect of a complicated costume, or the entertainment factor of a good skit.

2.What does cosplay mean to you?
It’s bringing to life the imagination. Alita doesn’t believe that it’s enough to only have a fantastic costume, you need to make an awesome skit to go with it, cosplay should be stage production and to steal a slice of life from your chosen universe. A cosplayer’s duty is to bring to life something otherwise unattainable, to drag it into reality and make it their own. Most of all though, it should be fun. 3.What was your first cosplay?
Back in 2003 I dressed as Son Pan from Dragonball GT and did what everyone did when they first cosplayed, cut my own hair like her…. used no make up… store bought some pants and some belts, and modified a small red shirt. It wasn’t really tragic as it was a simple costume, but looking back it’s amazing how far the cosplay scene in Australia has come since then.

4. Does your family supports your cosplay?
Tolerate would be the correct term, but I keep it strictly as a hobby, school and work always came first for me.

5. What is your most memorable cosplay experience?
Last year I planned a trip for Japan where at Fuji-Q theme park there had been announced an SCALE VERSION of the hanger bay of Evangelion (link here) and the entry plug in a magical place called Evangelion world (http://www.fujiq.jp/eva/). As Neon Genesis Evangelion is one of my favourite animes, I decided this was the time for me to attempt the Evangelion Shinji plug suit and I would then drag it all the way to Japan so I could sit in that entry plug and fulfill my life’s dream of ultimately, being the first cosplayer to have a perfect Shinji plugsuit cosplay. So I carried the 3 kg plug suit all the way to Fuji-Q japan, got there at ridiculous-o-clock-9AM (the theme park opened at 8:30), and beat all the crowds to get into that area.

The entry plug itself is an awesome bit if furniture which you had to pay 1000 yen ( $12) to get ONE photo with from one specific angle. The Japanese treated it almost like a hazard as it was surrounded by crash mats, had handlebars for the TWO STEPS that it took to board it and it generally looked pretty dopey in real life. I thought it was the coolest thing ever. My complete non-anime-fan friend who was with me had to live with the shame of a me getting into cosplay striding around this theme park attraction in my plug suit, then had to watch me haggle with the photographer to see if she would allow me to take my own pictures with the entry plug. She agreed in a manner which said,”do not encourage the freaks” and waved me on. And I proceeded to fulfill my life on dream. The results of which are here. It was like a pilgrimage to the heartland of cosplay.

6. What are your 2011 cosplay plans?
This year I’ve already completed a light-up version of Quorra from Tron Legacy using EL wire and eva skin foam pictured here. But I also have a few costumes lined up. Psylocke from X-men in which I shall be draglicious, give myself tons of fake boobs from chicken fillets and pad my ass like a drag queen in order to look toon-fresh. The pilot from Interstellar 5555, and later in the year, myself and Ailee will do our third Ghibli cosplay where we shall cosplay characters from Ponyo and I will be Fujimoto the wizard of the sea.

7. Notice you made Sephiroth cosplay,amazing! So share more details about this cosplay :o)
Sephiroth was an endurance cosplay, made within two months. I was very particular about getting the details of this costume correct as many cosplayers have done it, but there would always be one element slightly off. I also made the costume with the intention of reusing the wings we had previously made for Howl’s Moving Castle for Sephiroth’s one wing, so the coat itself had to be installed with a invisible zipper so I could slot in the wing when it was needed. I made from scratch almost every piece in this costume surprisingly. The ‘armour pauldrons’ we made out of toy helmets (I am blessed with tiny shoulders) which were re-carved and resprayed. The other armour was made with eva-foam. The buckles of Seph’s coat were made out of sculpey painstakingly to match. I adore the coat I made as it was fully finished, lined and the collar is 100% accurate. 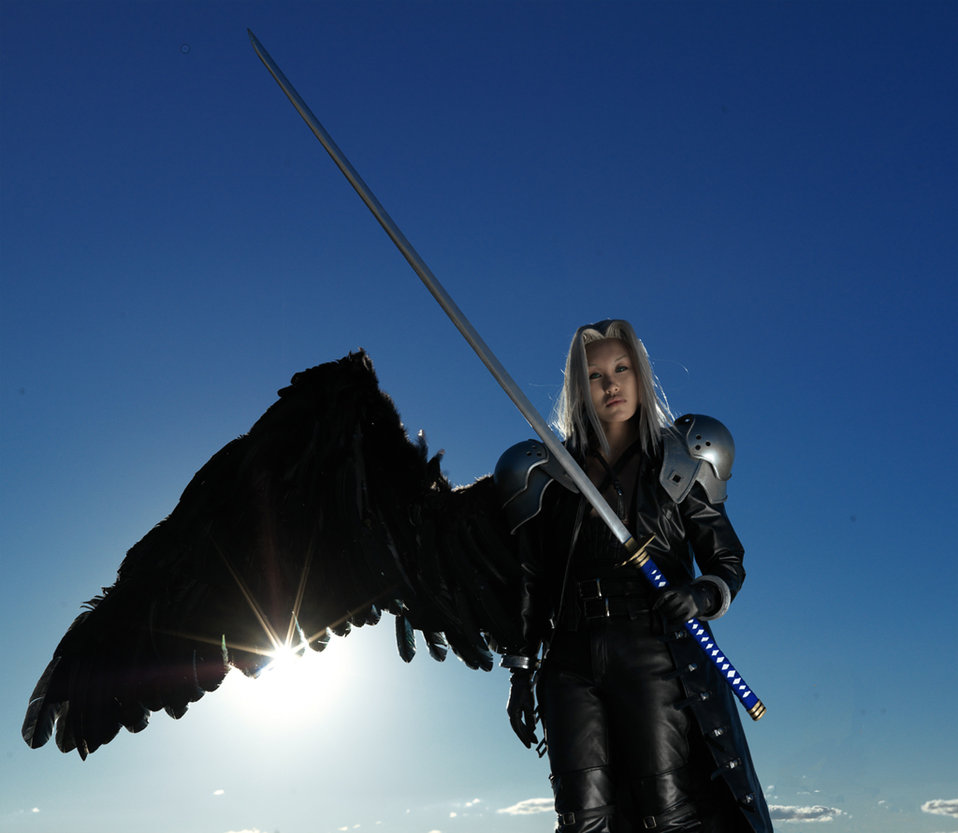 The biggest mistake I think, for this costume, was that I left buying the boots until the very last minute. And then, ingeniously (or tragically) decided I could simply make the boots despite the fact I only had two days left. But I did. I carved out platforms out of foam. Sewed together boot covers for thigh high boots and the belts for them in under 8 hours and glued on the rubber bottom etc. I’m still not sure what kind of high I was on to finish them in such a short time.

9. Do some changes happen to you after cosplay?
Every cosplay is a new set of challenges and I always learn something new. I now know how to rewire electricity, make a wolf puppet, craft wings and gigantic robots. It’s taught me you’re only limited to your imagination.

10. Any advices you wanna share with cosplay newbies?
Use each costume to teach yourself something, nothing is unachievable if you give it your all. Cosplay should be couture, you’re making a one of a kind costume fitted only to you, it should be be perfect and special. But even if it isn’t it , have a laugh wear your mistakes because you know, it should still be fun.