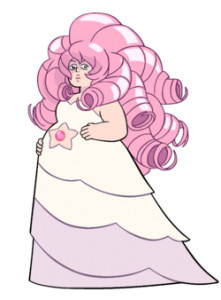 Hiya everyone! I’m sorry I haven’t posted in awhile >.< forgive me please? School has been a lot these past few weeks, but that should be no excuse! However, now I have everything settled and I can do more for all of you 😀 yaaaaaay! Anyways, today I’m going to do a tutorial on ‘Rose Quartz‘ star gem from Steven Universe. If many of you do not know ‘Rose Quartz’ She is the mother of the main character Steven in the show ‘Steven Universe’ and also the former leader of the Crystal Gems who protect earth and other worlds from evil and corruption. If you haven’t watched the show Steven Universe I highly ,( and I emphasize highly) recommend watching it and also exploring many of the other Crystal gems that are great for Cosplaying! I chose Rose Quartz because when she was first introduced  I was immediately captivated by her beauty and I love her background story on how she came to earth and how it led to Steven being who he is today 🙂

Now, before we can get started here is what you’ll need!:

1. Like always the first thing you must do before starting a project is making a pattern! First I made a pattern of how I would like everything to look on paper and then cut it out ( Great tip and strongly recommended!: When making a pattern always make a double or an extra of that pattern incase of losing and also because if you have detail in that pattern you can cut it out of the double and keep the original with no problem) 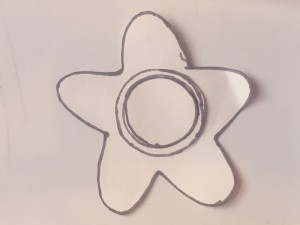 2. Now taking the double pattern (Which I hope you do) cut out the bigger circle in the middle of the Star. After doing that, do another double pattern of that and then repeat the same steps with smaller circle. It should look like the pictures below. 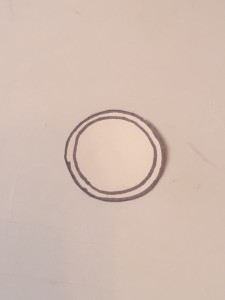 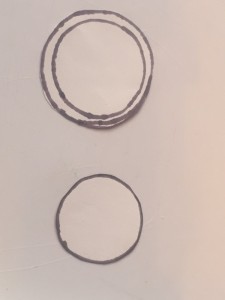 3. Now lay all your patterns out and it should look like the picture below 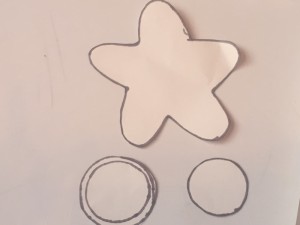 4. THIS IS CRUCIAL. Now there’s always a lesson learned in the mistakes you made and now I shall pass it on to all of you! Originally I used all black craft foam for this tutorial (Trying to save Craft Foam xD) but what I didn’t know is that after doing a great job in creating and putting it together, when I went to paint it the paint actually didn’t go so well with the foam because I had chose a dark color that would show through the paint. So, from this point on I recommend that you actually purchase the Craft Foam in the colors you would use for the tutorial unless you rather just do it the same way that I had done (Hopefully better :D). Whichever way you choose you’ll still be able to follow the tutorial easily, so no worries ^~^ People who paint will just have more to do and people who choose not too will have less to do :3

5. Now back to the tutorial! Lay your patterns down on the craft foam and cut them out (Great tip!: When cutting the pattern out you should use pins to hold the pattern out so the pattern will not shift while using the scissors or Exacto Knife) . When you lay all of them out they should look exactly like the pattern that you made. 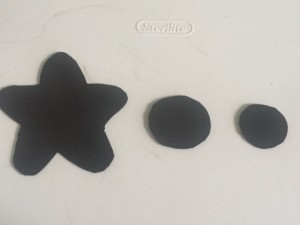 6. Its time to use the heat gun! Take the smallest upper circle and heat the foam of it up till its hot, before it starts cooling down push and bend the circle into something like a cup. (Working with the heat gun surprisingly took me a long time to master because I didn’t exactly know what I was doing at first and also I ended up burning the foam the first time >.< but take your time with it and don’t keep the heat in one spot and you should be fine! Also for the safety of not damaging anything, have something solid underneath that the heat gun cannot burn and ruin) 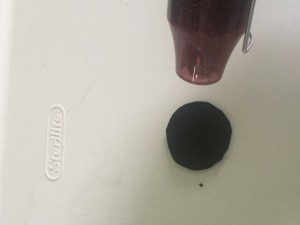 7. The little circle should look like this when its heated and shaped correctly 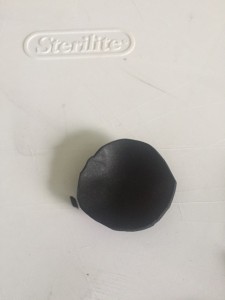 8. After doing that its time to hot glue everything down in the right place with the hot glue gun! First you need to glue the bigger circle down in the center and then the smaller circle down. When gluing the smaller circle down you should only put the glue down on the outer rims and gently push it down on top of the bigger circle. After gluing it should look like this. For anyone who chose to just choose the colored Craft foam, You’re already done (Yay!) 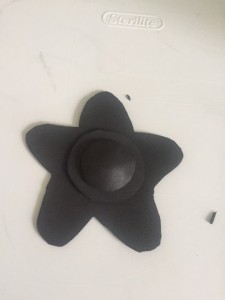 9. Now my painters and risk takers like me! After having all of this laid out in front of you, its time to paint!(Before doing so I do recommend going over the everything with Mod Podge to seal it) When painting you should always keep reference photos with you! Now first I started by painting the star yellow and once that was done I moved on tot he bigger circle between the smaller circle and star and painted that red. The top circle I painted pink to match the color of the gem. 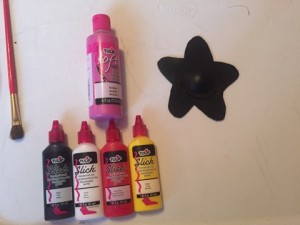 10. The way the paint came out surprised even me, but there’s always room for improvement! After painting everything your ‘Rose Quartz’ Crystal gem should look something like this (Mine is still drying in the picture >.<) I would say give it a day or two before touching it again and put it in a place that will get lots of sun. After it’s dried you should go over the everything one more time with Mod Podge (you can never seal too much!). After that everything is done and you have created your own personal crystal gem ‘Rose Quartz’ Crystal Gem. 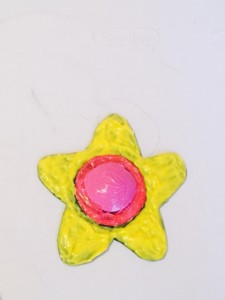 I hope you enjoyed this tutorial as much as I did. It reminded me that even in Cosplay there are mistakes that only lead you to making something even greater and I feel motivated to create a even better ‘Rose Quartz’ Crystal Gem while still being proud of my first attempt on it. This tutorial can also help you work on all the other Crystal Gems and give you an idea on how to create your own. What matters most at the end of the day is that you created something and had fun doing so 🙂 So as always, Stay Positive, Stay Healthy and Stay Creative.