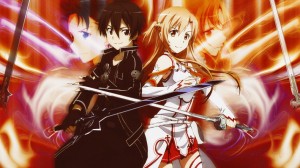 Kirito and Asuna are a lovely couple from Sword Art Online that many cosplayers would choose to be. You can find them on every convention.

But Do you know their love story?

This article will reveal how the romance between Kirito and Asuna develops, if you have any of the following question, you may also find an answer.

IMO it should be Asuna falls in love with Kirito first. Let’s check out.

Kirito and Asuna’s first meet, she did not show her face (Episode 2 Beater)

They formed a party together

Then I believe this is the first spark going between them.

Kirito gave Asuna a jar of cream(?) to put on the bread.

Kirito not only change it up but also changed Asuna.

Asuna ate it up within 1 second!

“The way to a girl’s heart is through her stomach.” (￣▽￣)

I think Kirito is surprised that Asuna’s such a beautiful girl (From the name, voice and body he can tell it’s a girl.)

After defeating the boss on the 1st floor, Asuna went after Kirito to the stairs and asked about his plan.

A girl must be a little interested in a boy to do so, right?

And obviously she took what he said to her seriously. “You’ll be really strong. So if someone you trust ever invites you to join a guild, don’t turn them down.” She later became the sub-leader of the Knights of the Blood Oath.

But Kirito disbanded his party with Asuna, he’d rather be a solo player. Right now he doesn’t show so much interest in her.

Here comes a huge moment under the tree, for Asuna, at least.

Kirito is enjoying life in the game. She saw someone treating the game as another reality and living well in the present. (This is why I say Kirito changed Asuna, she was hard-pressed to clear the game and would use any means to clear floors.)

As we can see later, that is what made Asuna loosen up and fall asleep, and she was really thankful for Kirito to show her what life can be like.

Finally Asuna took a move at the end of Episode 6, asking Kirito to add her as a friend.

Then Kirito got legendary S-class ingredient, he wanted Asuna to cook and share with her.

Wow~ inviting someone to your home, that’s a big move for a Japanese girl.

After the dinner, Asuna invited Kirito to party with her again, literally using a knife to force him to accept. (Well done chasing your love!)

Then I think here’s the first scene showing that Kirito’s really cared about Asuna.

He even accepted the duel quest of Kuradeel and defeated him. (Hero saves beauty, that’s more like it)

Later in the Dungeon, they cooperated really well killing all the enemies. (Just like the name of this episode: The Sword Dance of White and Black) I believe this also helps them bond and build trust.

Many people learn their feeling when they’re about to lose someone.

Kirito was nearly killed by the boss of the 74th Floor and he was out for just a few seconds but Asuna’s all in tears. Seeing him wake up, she holds Kirito tightly for about 4 minutes!

Kirito also joined in the the Knights of the Blood Oath. When he told Asuna the reason he avoided guilds. Asuna said she would protect him. (Episode 10 Crimson Killing Intent)

And she did keep her promise. She saved Kirito from being killed by Kuradeel.

Later Kirito sacrificed one hand and killed Kuradeel, which must be the first time for him to kill a person.

Of course there’s still a small step that needs to be done before they two get married.

Proposal is essential to a marriage.

There should be a beautiful wedding for them so I use this fanart to celebrate. 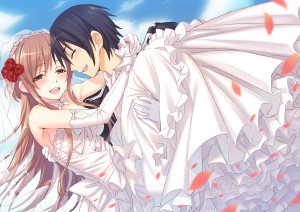 Live long and happily after~ Kirito and Asuna~!

And best wishes for all cosplayers who have cosplayed this lovely couple!