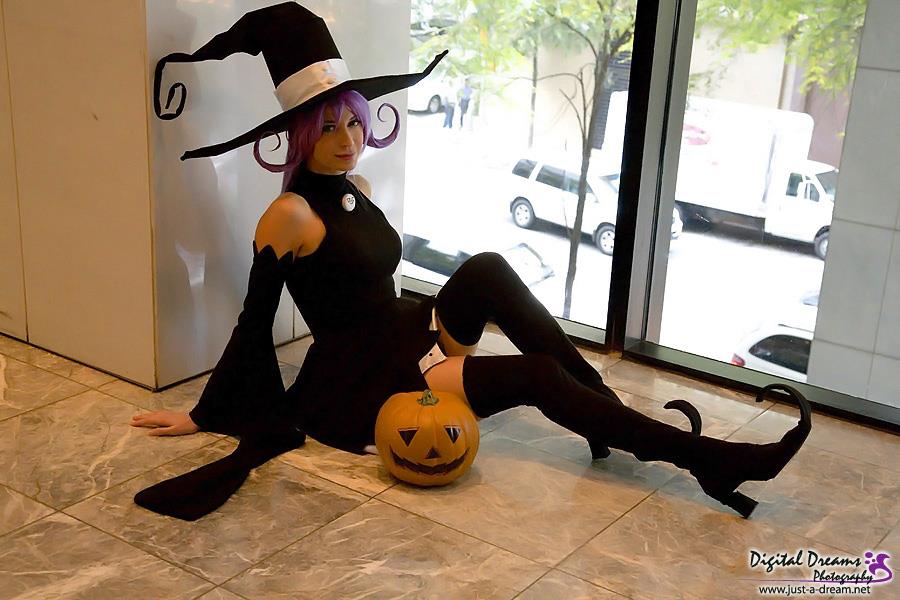 1. Hi Heidi,thanks to join in our interviews,so please introduce you first.
Hello there! My name is Heidi, but a lot of people know me as Cosplay Kitten. I’ve been cosplaying at conventions since 2000, but actually made costumes long before I even knew what cosplay was! I’m originally from the Chicago area in Illinois, and I’ve lived in several major cities in the U.S. such as Los Angeles, Sacramento, and currently, Denver. I’m a pretty laid back person, and when I’m not sewing costumes, I’m usually focusing on my graphic design career, hiking in the wilderness, playing with my kitties, or playing video games. Thank you for the interview, it’s an honor to be featured on your website! ^_^

2. Your cosplay have been featured in many videos and anime magazines , so how did you get started in with cosplay, what was your first cosplay?

My grandmother taught me to sew when I was very young – I think I was only ten years old when I was making my own clothing and costumes! I had a Nintendo, and was addicted to role playing games…my favorites at the time were the Final Fantasy series, and I adored the White Mage. So my very first costume was a White Mage from Final Fantasy, sewn out of a white bed sheet and decorated with a red sharpie marker, lol.

Years later, I was still making costumes, but had gotten a lot better at it! I’d made friends with other costumers through the internet and my circle of friends, and in 2000 a bunch of us went to Anime Central as Final Fantasy characters – and Aeris Gainsborough from Final Fantasy 7 became my first “real” costume worn at a convention. I’ve since redone that costume twice, as I’m my own worst critic and the 2000 version of my Aeris was quite…interesting, lol. I didn’t even know anything about makeup or hairstyling or prop making then, and it really goes to show that practice does make perfect. 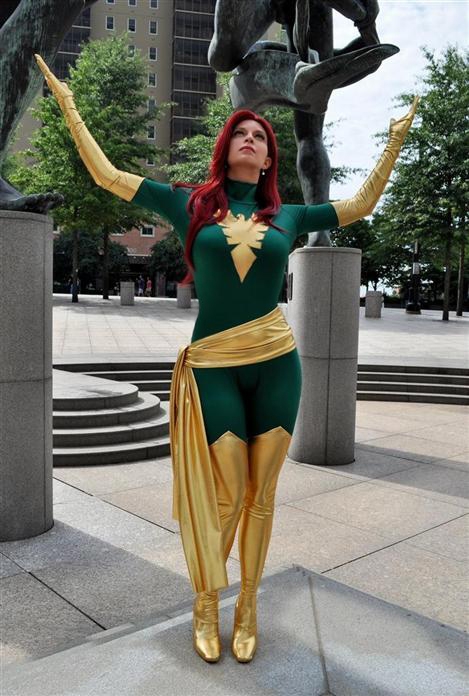 I get asked this question all the time, and I honestly can’t give a straight answer! The reason is, I put a lot of time and love into each and every costume I make, and they all have a special place in my heart and their own wonderful memories. Each one is like an old book you just love to reread – I never get tired of any of them!

I guess if I had to pick the ones that mean the most to me, it would be because they’re based off my very favorite videogame or anime characters and because I’ve had so much fun in the costumes. The top three would be Katt from Breath of Fire 2, Blair from Soul Eater, and Aeris from Final Fantasy 7.

Once I decide I want to make a certain costume, I make out a list of all the parts I need for it, and all the supplies I’ll need to buy. I save as many reference images as possible, as accuracy is very important to me, and sometimes bounce a few ideas off of friends to get opinions on how things might work or look.

After I’ve got my supplies and ideas, I start making things! I’ll also sometimes sketch things out, to help envision my ideas. As I’m making things, I do a lot of mock-ups, tailoring, and fitting, which often has me running around the house in bits of costume parts, lol. But I need to make sure those boot covers will stay up, or that headpiece will fit through doorways! I try on clothing parts a lot – a good fit is very important to me and can make or break a costume, in my opinion. I’ll also sometimes multi-task by working on two costumes at once; sometimes I just need a break if I’m doing something difficult or tedious on one, and it’s nice to move onto something fresh and new until I’m ready to go back and tackle the first costume. 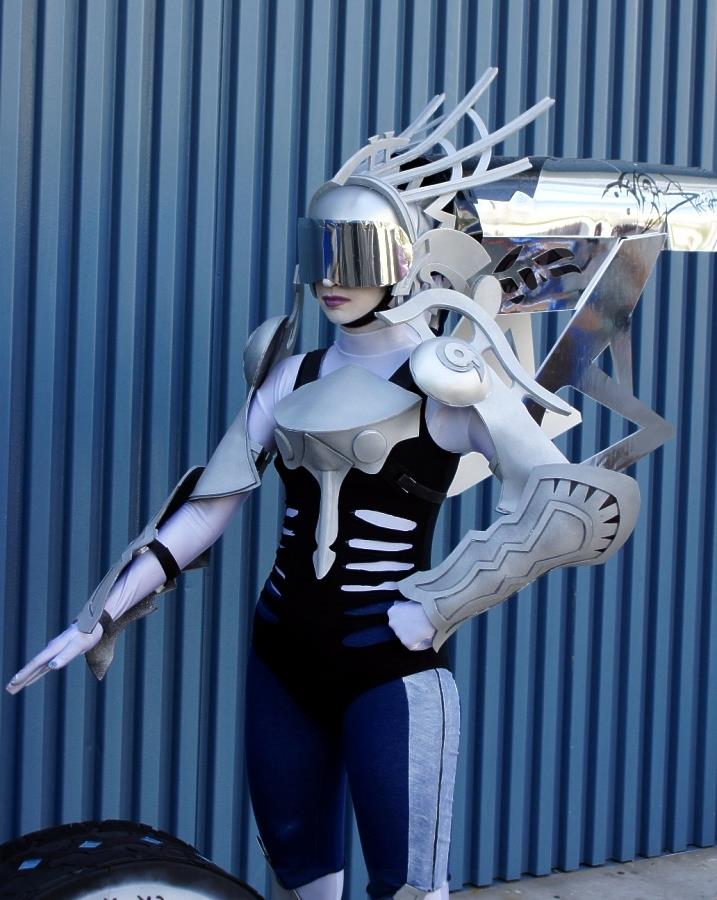 As much as I love the creation phase of cosplay, the best moment is when everything comes together and I try on that new costume, with all the pieces and the wig, for the first time. It’s very rewarding to see all the little pieces of a whole come together and bring your favorite character or design to life! It really makes all those pin-pricked fingers and hot glue burns worth it. ^_-

5. What is the biggest learning curve you have learned about the hobby in the past years?

I’d have to say it’s pattern making. I’ve always had extremely strong sewing skills, and have been able to work with wigs and props, but when I first started making costumes, finding and altering patterns was such a challenge! A lot of costumes have designs you just can’t match with store bought patterns, so everything has to be altered or made from scratch.

The more I started altering and making my own patterns, the better I’ve gotten at it. Some of the early ones I made were not so great, but everyone has to start somewhere, and now I know most basic pattern shapes from memory and just draft stuff right up with muslin. Some people get frustrated with something new and difficult, but if they keep at it, they can master it with time and practice! 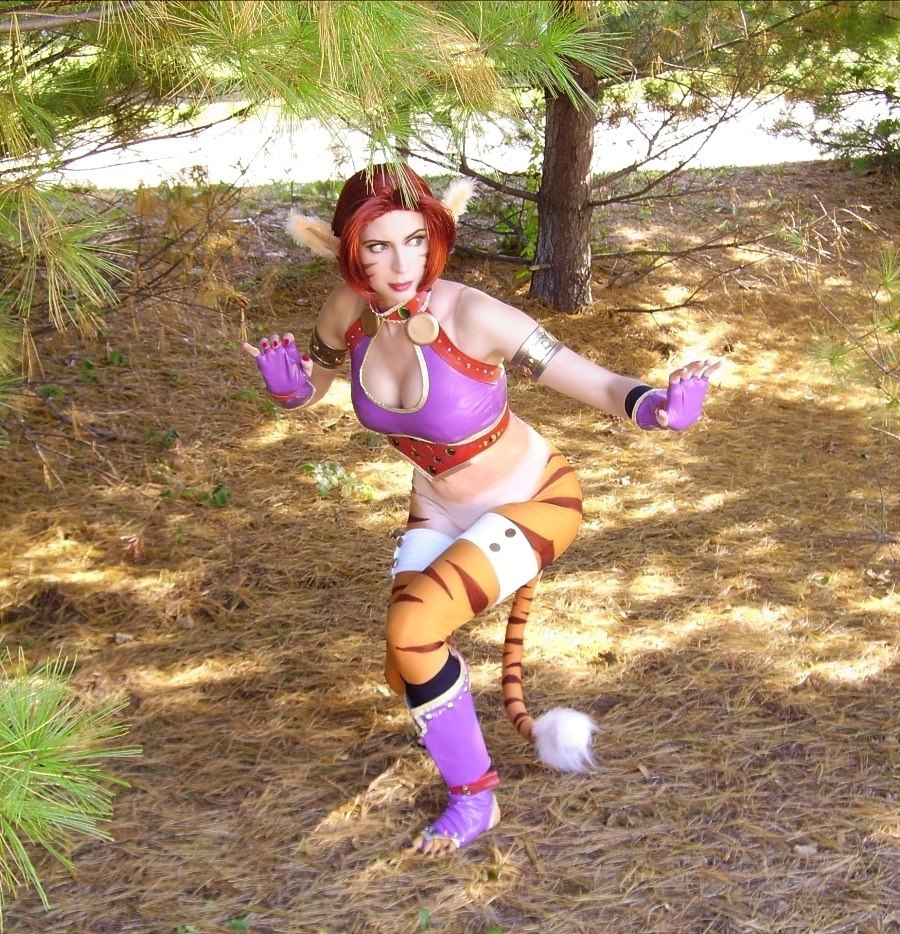 6. You also love painting, drawing and write stories,you must get many cosplay ideas fro them, so any interesting wanna share.

Actually most of my costume ideas come from my favorite games, comics, or shows. I’m just a really creative person who likes to branch out into all sources of expression! Being able to draw and paint does definitely help when I’m sketching out costume plans or an original design though, and it comes in handy when I have to do any kind of painted designs or intricate details on a costume or prop.

Don’t let yourself be discouraged if you don’t think you’re good enough or can’t figure out how to make something – everyone has to start somewhere! No matter how skilled someone is, they too have suffered hot glue gun burns and backwards seams at some point in their years of costuming. With practice and patience, I believe a person can accomplish anything.

And most importantly, don’t ever forget to have fun! A lot of people often get caught up in the stress of competing in costume competitions, or get upset because they can’t get a costume done in time or done the way they want it. Still others fall victim to cosplay drama. If I could give one piece of advice to anyone who cosplays or is interested in getting into the hobby, it would be this: cosplay is all about having fun; don’t ever lose sight of that or forget how to smile, laugh, and enjoy yourself!

8. Lastly, what is your con schedule looking like through 2013?