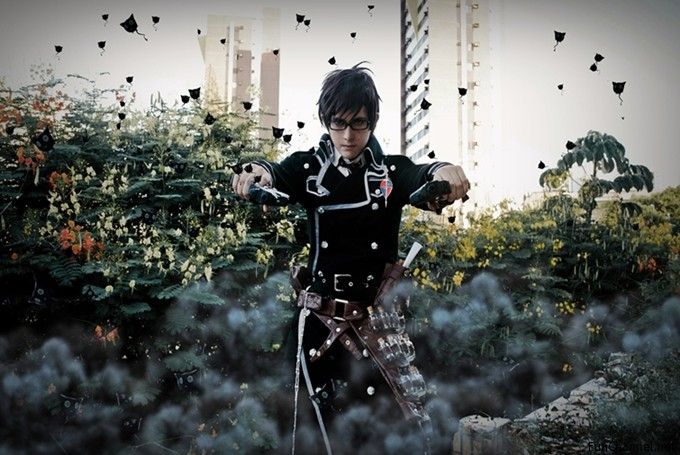 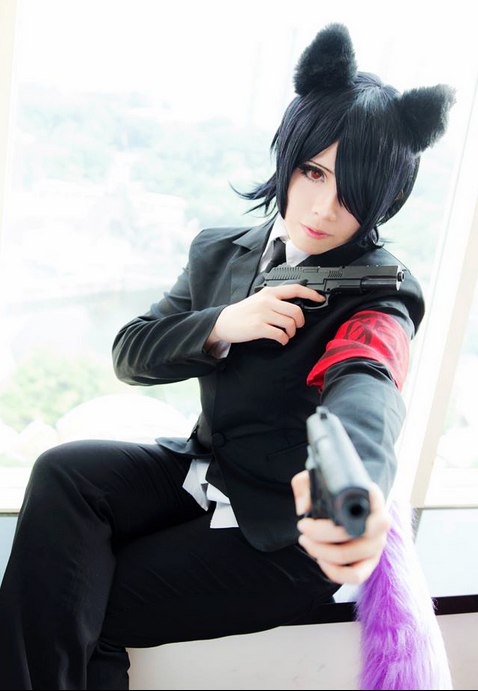 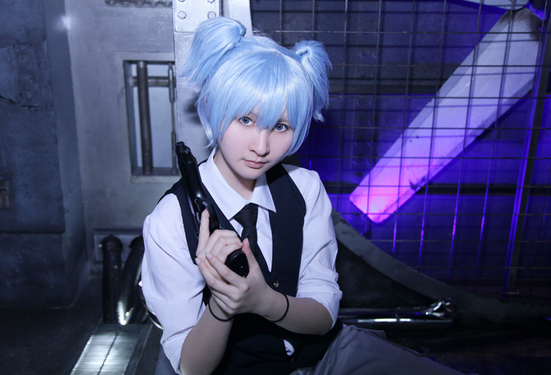 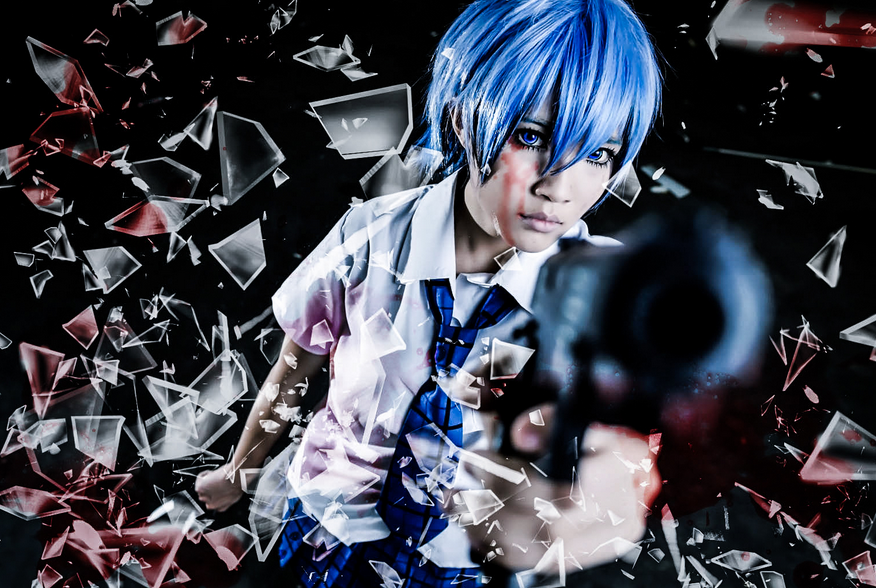 The pistol he uses is called Silver Horn Custom “Trident“. It is a specialized CAD based off the long-barreled Silver Series Silver Horn. It is inputted with most of Tatsuya’s high level Decomposition magics. Tatsuya has used this CAD to cast high precision magic, decomposing needle-sized holes which target his opponents’ nerves and blood vessels to incapacitate and cause severe pain. This is Tatsuya’s favored instrument. This CAD has interchangeable cartridges loaded with different types of magic. 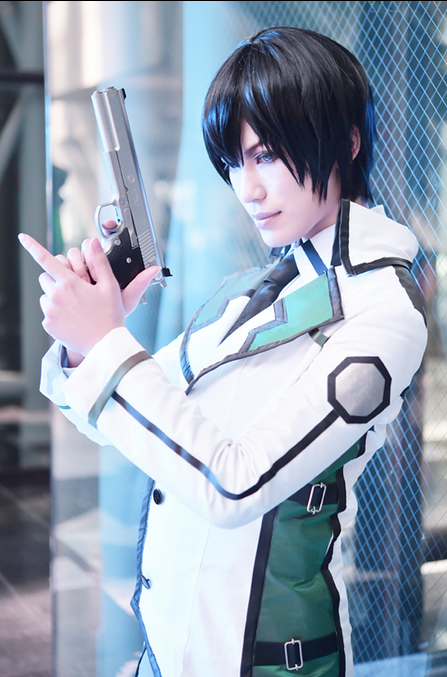 Panty
Panty is a main character in the anime Panty & Stocking with Garterbelt. She owns a pistol named “Backlace“. She hurts evil spirits with her younger sister Stocking. She is a sharpshooter. 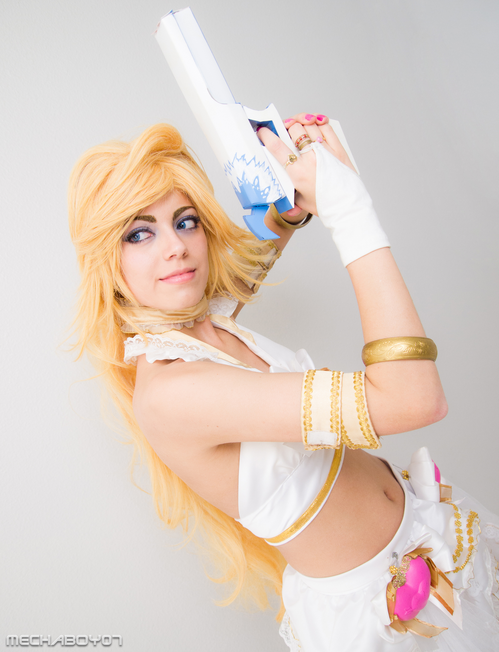 Death the Kid
Death the Kid is the son of Lord Death in Soul Eater. He is meister of the Demon Twin Guns Elizabeth Thompson & Patricia Thompson. He suffers from a crippling obsessive-compulsive disorder for symmetry in everyday life and unable to fight using one of them while the other is missing. 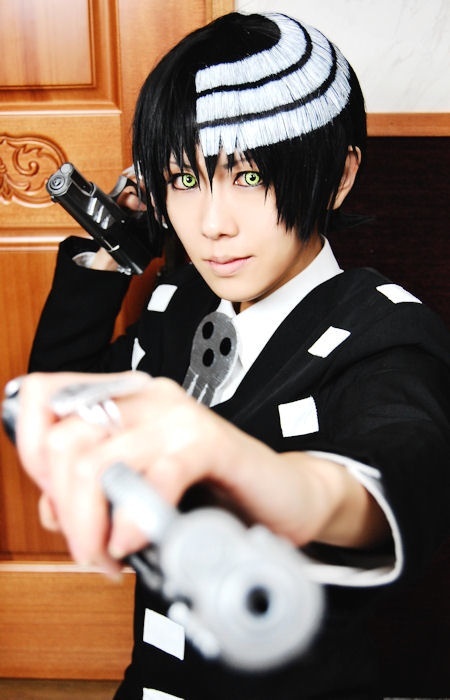 Space Dandy
Space Dandy is not only “a dandy guy in space” but also “an alien hunter” in search for aliens with his robot assistant QT and a cat-like alien named Meow. His mission is to find new species of aliens. Shooting and fighting are his strong points. His guns do not shoot bullets but razor. 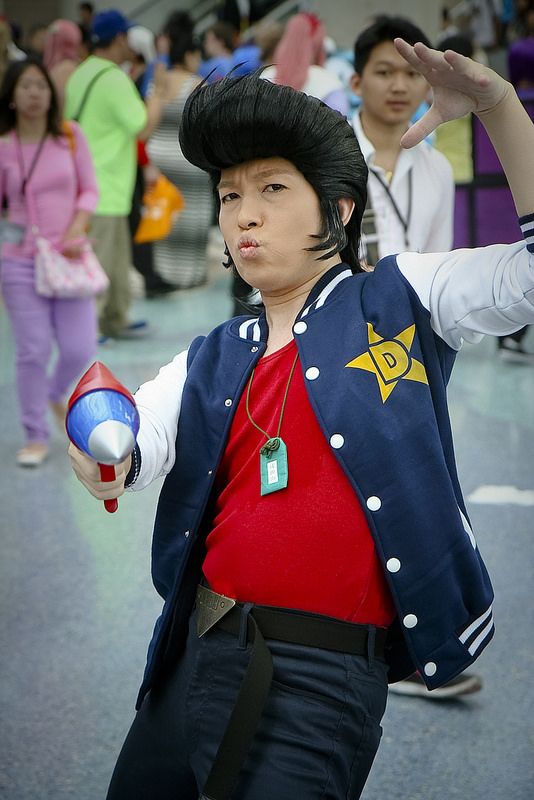 Alucard is the main protagonist of the Hellsing anime and manga series. He is the most powerful warrior of the Hellsing Organization which works against vampires and other such supernatural forces. 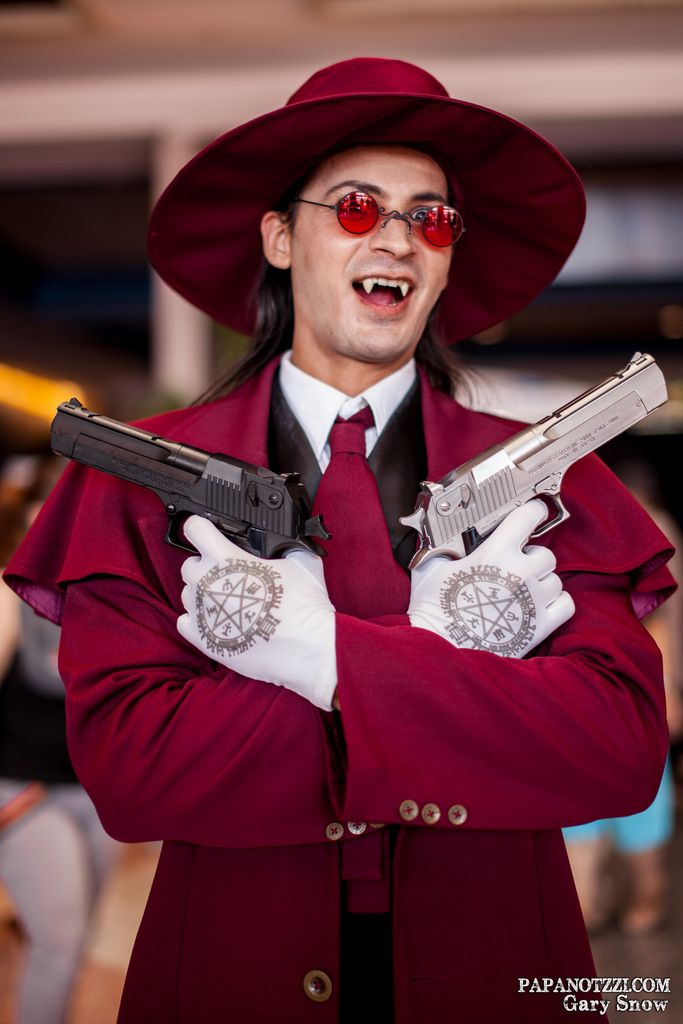 Nero in Devil May Cry
“Blue Rose”, which is made and modified by Nero himself, is a rotating pistol with double-tube. Nero can pour the devil’s power into the bullet and complete a three-section shooting. He often uses his left hand to make a shoot. 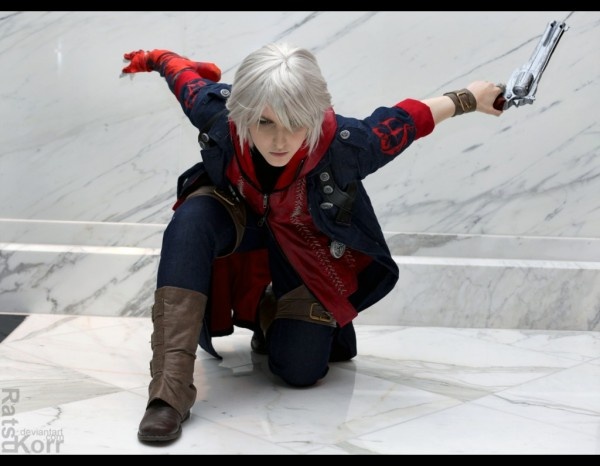 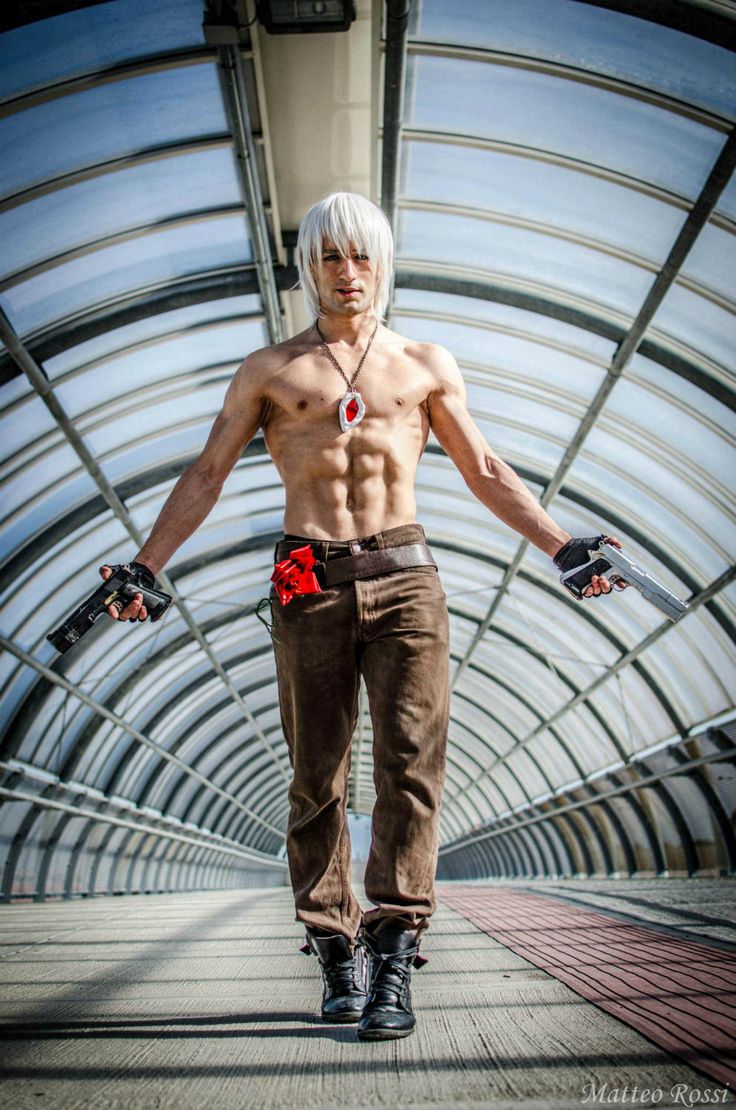 If you prefer larger guns, then check the following characters, one of them must be your cup of tea.

Sheriff of Piltover Caitlyn
Caitlyn, the Sheriff of Piltover is a champion in League of Legends. She has a famous saying like “Go ahead, run. I’ll give you a five minutes head start.” She has different guns you can choose from when you cosplay. 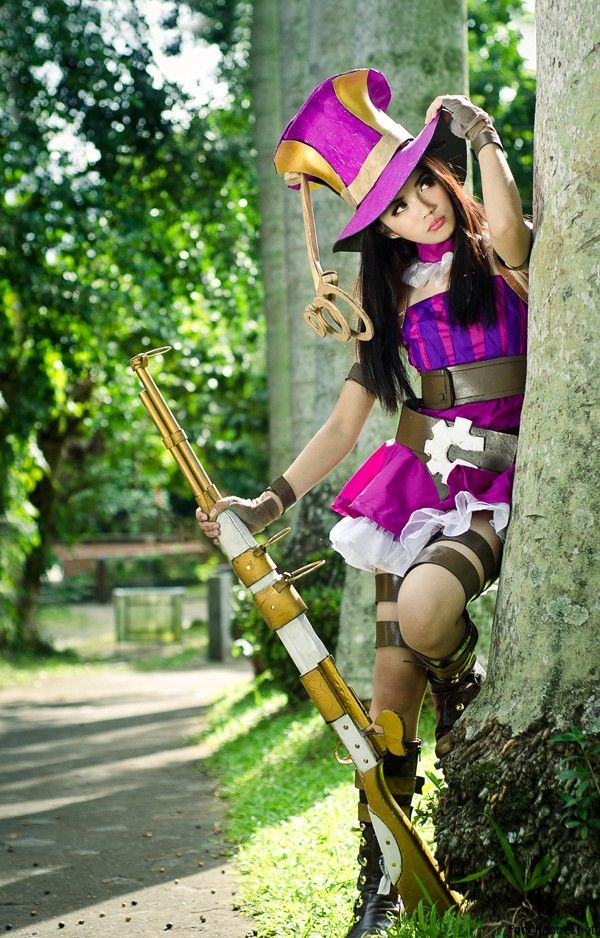 Sinon is a skilled VRMMO player in Gun Gale Online. Her real name is Asada Shino. She is nicknamed Hecate in GGO, after her gun PGM Ultima Ratio Hecate II, a rare .50 caliber anti-materiel sniper rifle. She is one of the main characters of the Phantom Bullet Arc and the first female player that Kirito met in GGO. 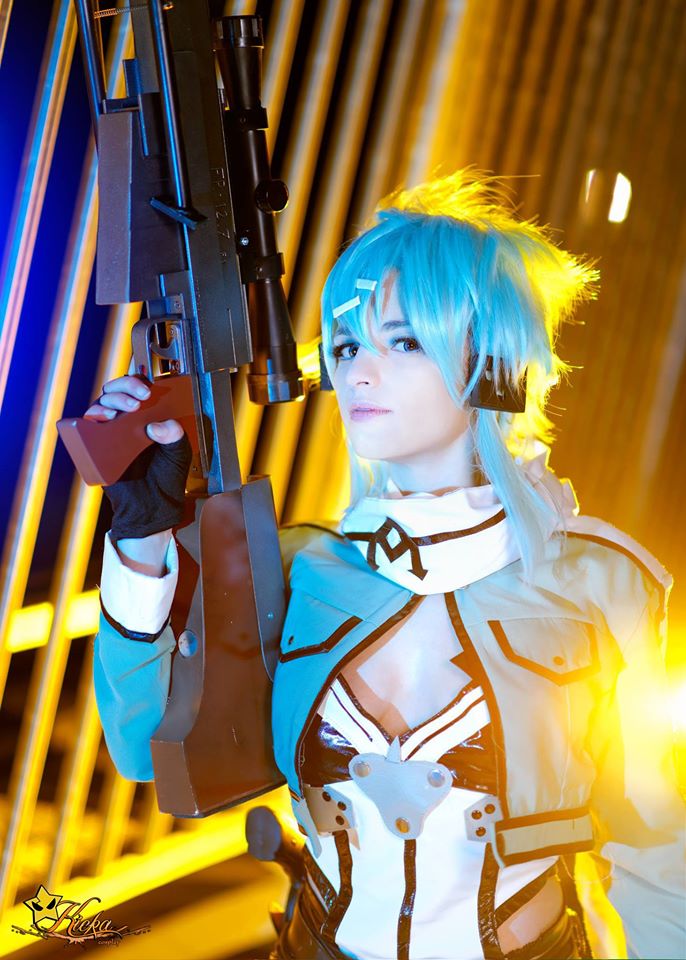 Mami Tomoe
Mami Tomoe in Puella Magi Madoka Magica often uses guns in the battle that fighting against witches. She can summon flintlocks constantly. The flintlocks have most excellent ballistic curve and range of shoot. 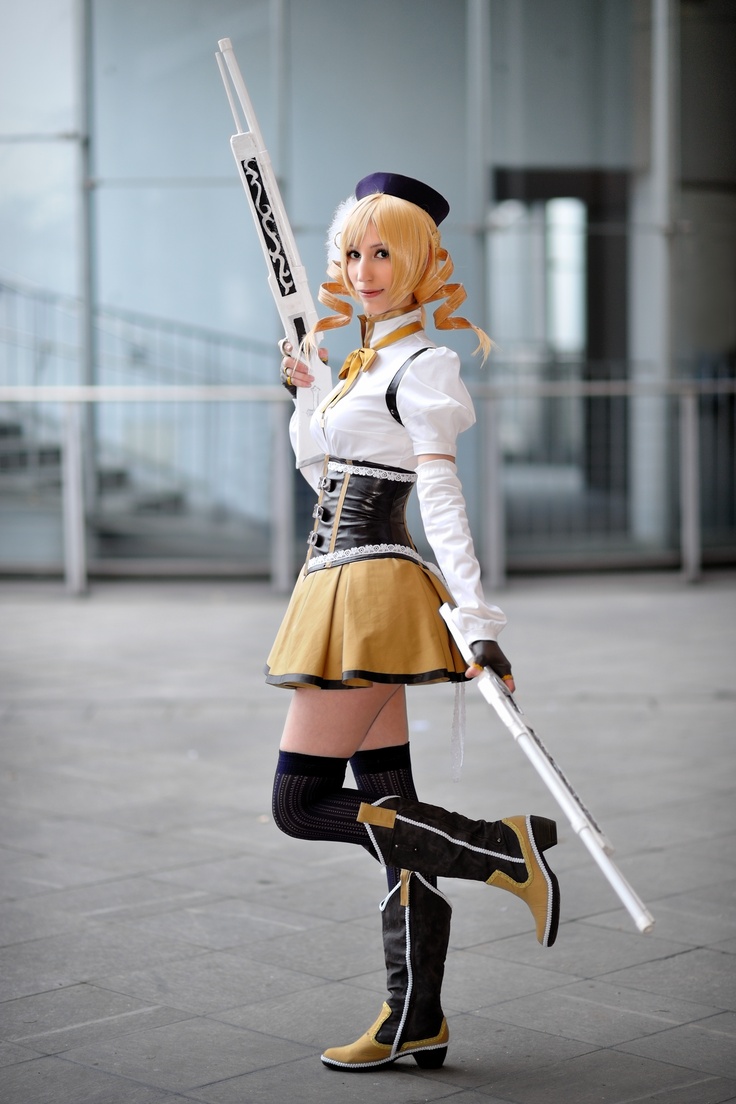 Seras Victoria is one of the main protagonists in the Hellsing series. Seras was turned into a vampire by Alucard to save her from a would-be fatal gunshot wound in the chest that he also caused. Her weapon is a rifle called “Harkonnen“. 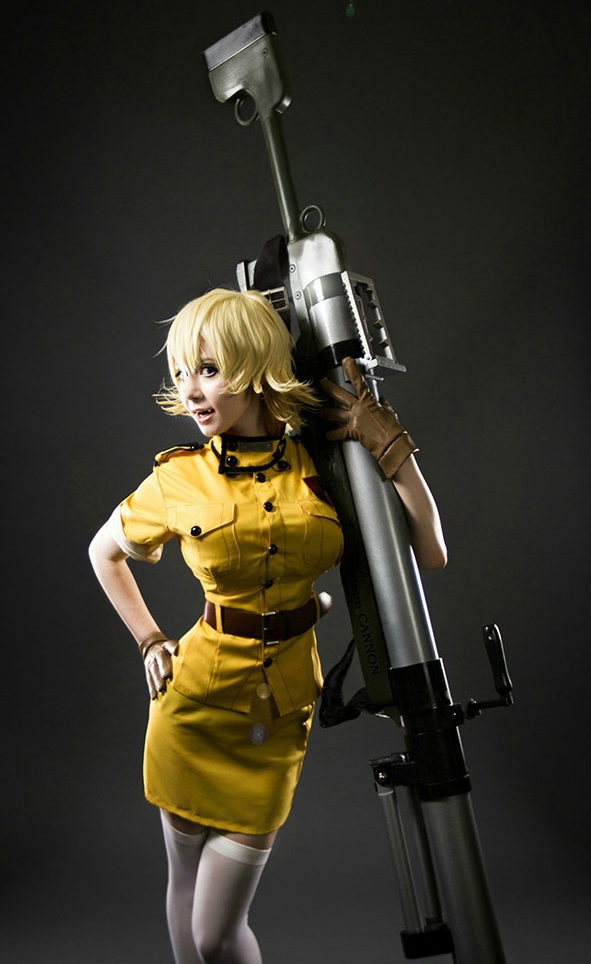 Hope the above introductions can help you choose a suitable role if you are interested in cosplaying with guns.

Part 2. How to Pose with Guns and Take Pictures

As you know there are all kinds of characters who hold guns in animes. Whereas most of the cosplayers hardly use a gun in their real life. So how to pose when holding guns seems a question. Here I will give some ideas to you all who are interested in or planning to cosplay some characters with guns. My guide is also aims to give ideas to photographers about how to take a picture of the cosplayers who are holding guns.

The best way to cosplay the characters who have specific poses with their guns is just follow their poses. I know some of their poses are very humoristic or even silly, but they are just their poses. Silly poses are fun to have with guns. So just imitate their poses. 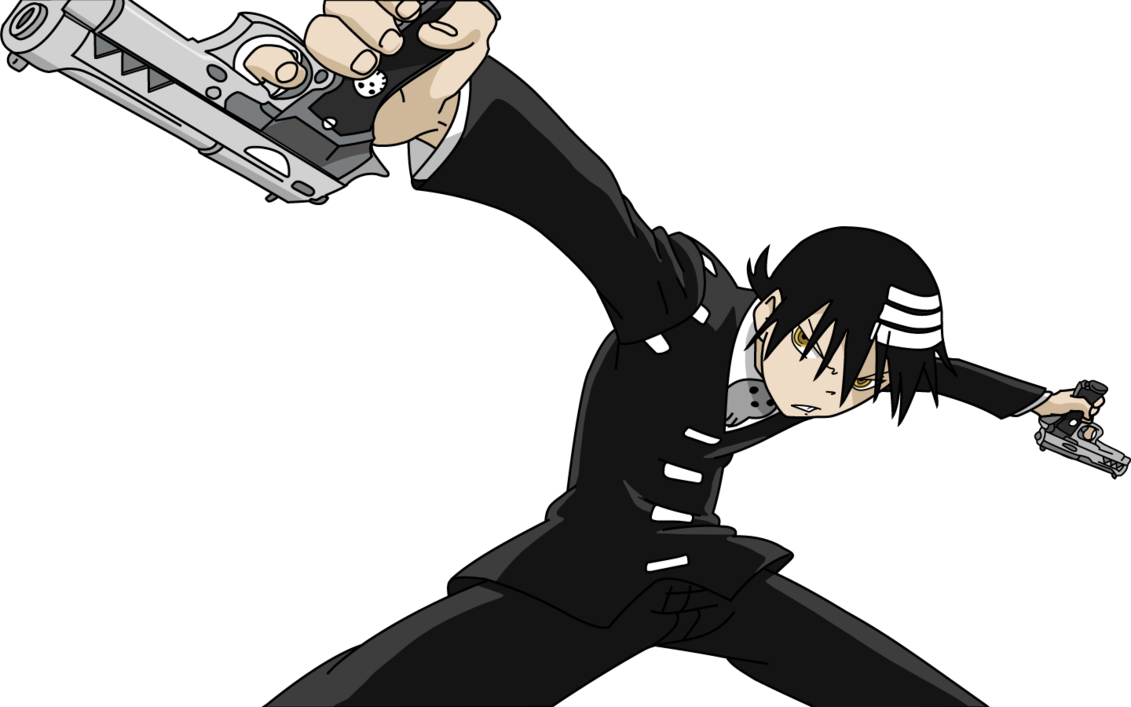 Then, let’s talk about some serious poses. That’s what the guide focus on. 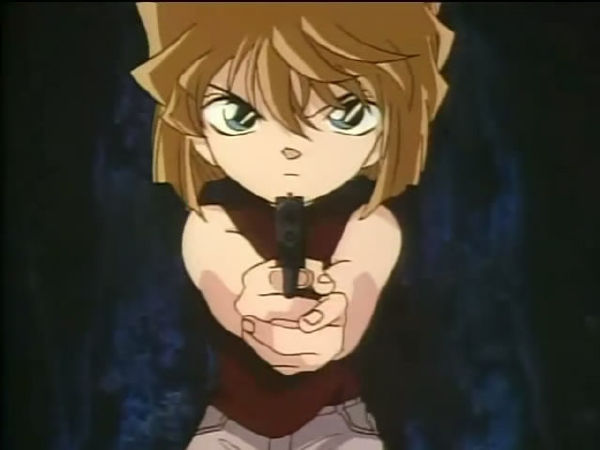 This is a good pose for a handgun. It is the basic and average style pose, accurate and cool.

Check the pictures below for correct holding of pistols. 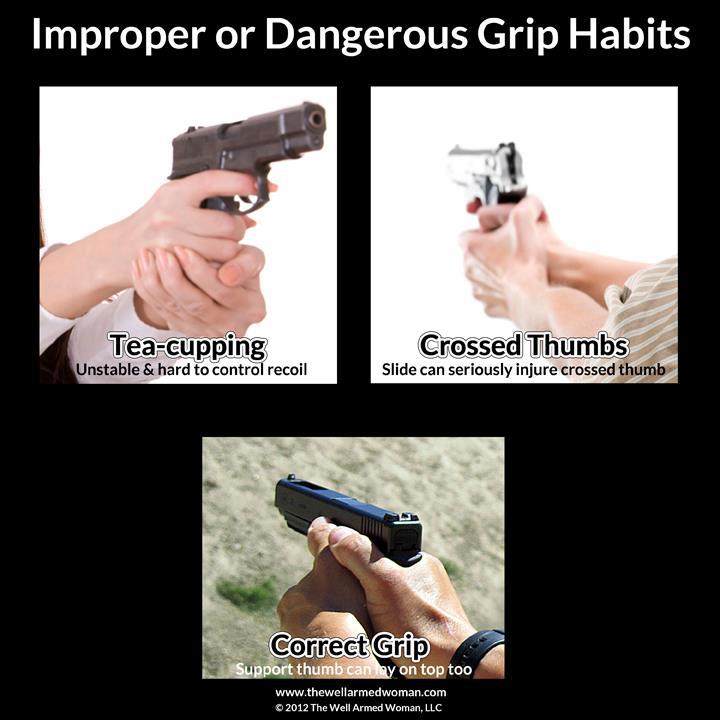 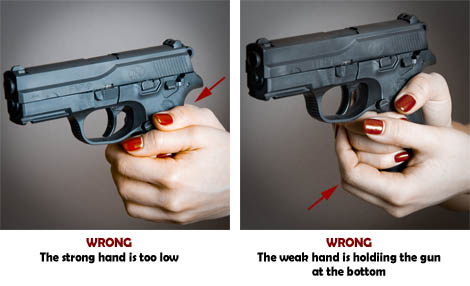 And don’t forget the 2 most important points. (This advise from reddit friend ronan7557 , thank you!)

Taking pictures seems easy, but without correct technique the pictures may come out bland and boring. Here are the tips:

Get the camera lens close enough to the cosplayers and make their pose clearly shown, and make the details of pistols and their costumes clear. 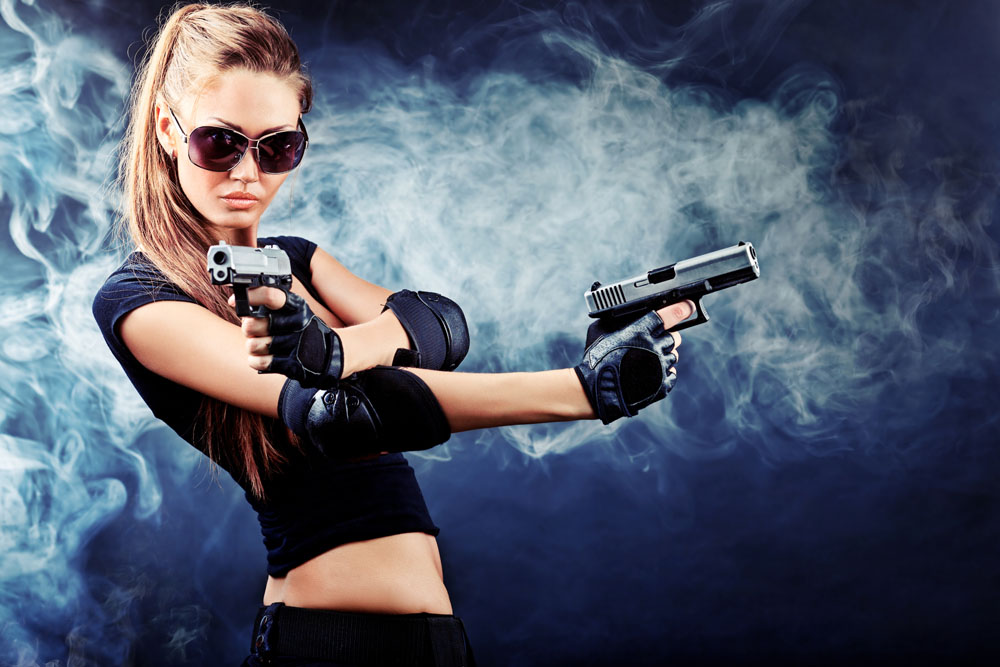 Just get a cosplayer moving around to get details of the costume and his/her weapons.

That’s my guide for guns to dear cosers. Hope this article is useful for you.